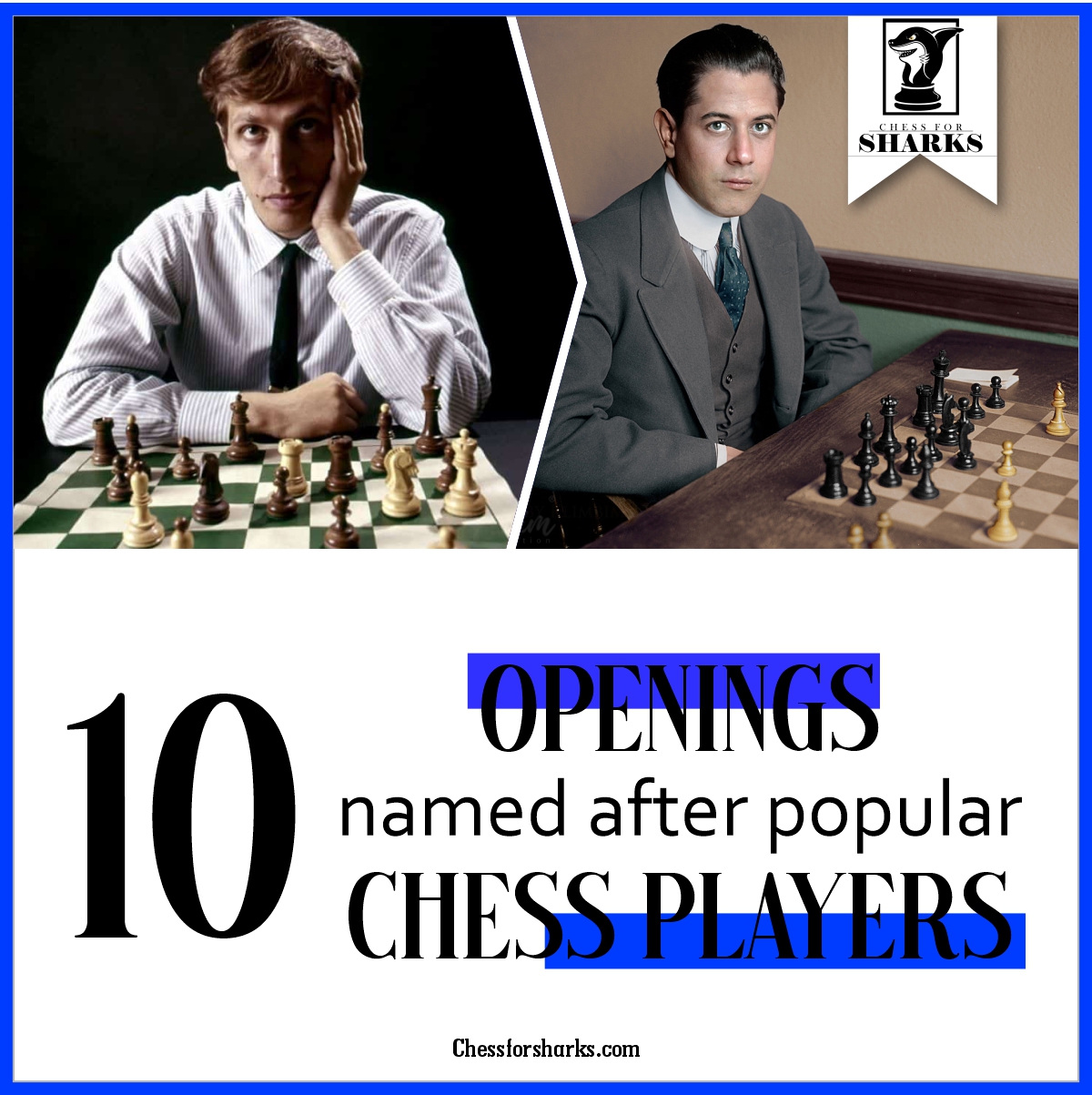 There are thousands of openings(along with variations) in chess theory. Many chess players discovered chess openings and stamped their legacy in history. In this article, we look at the most popular players to invent openings and opening variations in chess.

There is no doubt that Pal Benko qualifies as one of the greatest chess players of all time. It’s safe to call him one of the greatest PALs to the Royalty Game. His contributions on and off the board cannot be overlooked. We certainly think he doesn’t get enough credit as he should for his contributions. A strong professional player, writer, composer, and trainer, Pal Benko went the extra mile and discovered his opening—The Benko’s Opening. He didn’t stop there as there is also the Benko gambit of the Benoni defense.

The Benko opening is simply 1.g3. Similarly, It can also be called the King’s Fianchetto Opening. That’s not all. This opening has many names! Hungarian opening, Barcza opening, and Bilek opening. Generally, the Benko opening can be classified as a Flank Opening. In summary, this opening prepares the king’s bishop for a fianchetto via Bg2.

In terms of literature, Richard Reti is right on top as one of the greats in that regard. He played a major role in modernizing the game of chess. As a top player, he was so good that he landed Jose Raul Capablanca his first defeat in 8 years! He also quenched other top players like Alexander Alekhine and Akiba Rubinstein.

1.Nf3 d5 2.c4 are the opening moves that determine the Reti opening. It is also a flank opening that stems from the Zukertort Opening (1.Nf3). White tries to deflect Black’s central d pawn in a bid to gain more control of the centre. The Encyclopedia of Chess Openings (ECO) has the Reti opening at A04-A09.

If you think “unorthodox chess”, Bent Larsen should also run through your mind. He was a Danish grandmaster that trailed Bobby Fischer through the 60s and 70s. One thing he had in common with other opening inventors like Richard Reti and Pal Benko is being an author. It seems as though being a chess author is the secret to discovering an opening! Take note!

The Larsen’s opening is an unorthodox(flank) opening that is characterized by 1.b3. It appears just like the Benko opening but on the queenside. This is why it is called the Queen’s Fianchetto Opening. Its ECO is A01.

Many beginner chess players usually know the legendary Alexander Alekhine. He was the world champion for a staggering 17 years between 1927-1946. Alekhine was the fourth World Champion. He was able to defeat the Cuban Legend Jose Raul Capablanca who seemed to be unstoppable at the time.

Alexander Alekhine discovered an opening called the Alekhine Defense. It is an opening that immediately attacks White’s King’s pawn opening with Nf6. This attack could immediately turn the predator into the prey when White plays 2.e5. Of course, Black has reasons for this move. The motif for 1…Nf6 is to draw White’s pawn and weaken the squares closer to the officers early on in the game.

The Philidor defense comes to play after responding to White Nd3 with d6 in the King’s Pawn Game(1. e4 e5). Black opts for a safe and defense style that leaves the possibility of an open game.

Regarded as one of the greatest chess players, Bobby Fischer enjoyed playing the King’s Gambit. Fischer always relished displaying his creativity. He won many games with exemplary brilliance, worthy of making jaws drop.

The King’s Gambit presents an open game setting and Bobby Fischer stamped his mark and discovered a variation on the opening with 3…d6. The Fischer defense of the King’s Gambit occurs when the gambit is accepted. The defense typically continues to a position where Black gets two pawns in White’s half(f4 and g4) of the board. This position slightly cripples White’s Kingside which could spell doom for White.

Is it the one that held the World Champion title for a record longest period? Yes! That’s the one! This record set almost a century ago remains valid till this very day. No wonder this genius was able to stamp his signature in openings. You know what else proves his genius? He was buddies with THE Albert Einstein!

The Russian legend was the seventh official World Champion in chess history after being a candidate eight times! We’re glad he achieved this title as he did a lot for the growth of chess. To date, he holds the record for having the most Olympiad medals!

1.d4 Nf6 2.c4 g6 3.Nc3 Bg7 4.Bg5 are the sequence of moves that indicate this variation of the King’s Indian Defense. The Smyslov variation is particularly indicated by the Bg5 move that aims to mount pressure on a knight that can do little or no harm at its current position.

Not surprisingly, we find another World Champion on this list. Jose Raul Capablanca was the third official World champion. Along with inventing an opening theory, he also discovered a chess variant called Capablanca chess! He is regarded as one of the quickest players of the 20th century! Mikhail Botvinnik regarded one of his books Chess Fundamentals as the best chess book ever written!

The Capablanca variation is commonly used in the Four Knights opening, but it can also appear in the Nimzo-Indian and Caro-Kann defenses. Like the Smyslov Variation, the Capablanca Variation is also achieved when a bishop threatens a seemingly harmless knight. In this case, Black does the attacking.

American Legend Paul Morphy lived in the 19th century where he was dominant in World Chess. He is also regarded as World Champion but unofficially. He easily won against strong players in his era like Alexander Meek. Despite retiring early from chess(22), he maintains his stance as one of the most talented players of all time.

The Morphy Defense is a simple and natural move in the popular Ruy Lopez. It is achieved when Black opts to immediately repel White’s b5 Bishop. Paul Morphy discovered and named this variation early in his career.