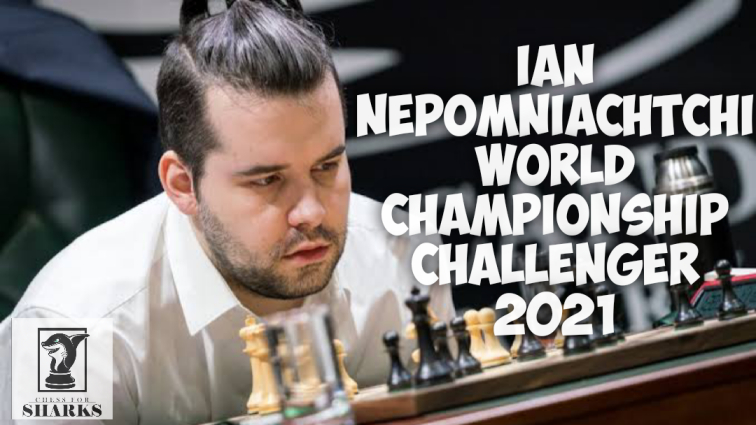 If you watched the Candidates tournament a few months ago, you should know of the name “Ian Nepomniachtchi” as the popular Russian Grandmaster was able to win the prestigious biennial tournament and earn the rights to challenge Magnus Carlsen, the highest rated player in the world for the much coveted title of world champion.

The World Chess Championship is the match that determines the world champion in chess. It’s basically a series of matches between the champion and a challenger, with the outcome of each match determining who gets to play the next champion.

In this blog post, you’ll get to know more about the new challenger, Ian Nepomniachtchi and have a closer look at his life and chess career.

Who is Ian Nepomniachtchi?

Ian Alexandrovich Nepomniachtchi (also popularly known as Nepo) is a 30-year-old chess grandmaster who was born on 14th July, 1990.

The Russian chess prodigy achieved the Grandmaster title when he was 17 years old and currently has a standard peak rating of 2792, just few points away from the legendary 2800 that few players, the likes of Kasparov, Carlsen, Ding, Caruana e.t.c. have been able to achieve.

Nepomniachtchi has won a number of tournaments which includes, Tal Memorial in 2016, Aeroflot open in 2008 and 2015, Russian superficial in 2010 and 2020, and the 2010 European individual chess championships.

By finishing second in the FIDE Grand Prix 2019, he qualified for the 2020/2021 candidates tournament where he emerged victorious amongst other top players like Caruana, Maxime vachier-lagrave (MVL), Anish Giri, Ding liren, Alexander Grishuk and a few others. He won with a round to spare.

Now, he will face Magnus Carlsen for the World Chess Championship title this November 2021 and the match will take place in Dubai, UAE.

Brief look at his Career

Ian Nepomniachtchi began playing chess at the age of four and a half years. He has won the European Youth Chess Championship three times.

Nepomniachtchi also won the World Youth Chess Championship in the U12 division in 2002, narrowly defeating Magnus Carlsen on a tiebreak.

2007-2009: In 2007, he earned his first grandmaster norm by finishing second in the C group of the Corus Chess Tournament in Wijk aan Zee.

He also won the Ordix Open, a quick chess event in Mainz, in the same year.

2010-2011: Ian Nepomniachtchi won the European Individual Championship with a score of 9/11 in Rijeka in 2010. He won the Russian Chess Championship later that year in Moscow, after defeating Sergey Karjakin in a playoff.

In 2016, he earned a team bronze medal and an individual silver medal for Russia at the 42nd Chess Olympiad.

Ian defeated world champion Magnus Carlsen in a chess game at the London Super Tournament on December 10, 2017. The Russian GM also won the 46th Dortmund Sparkassen Chess Meeting in July 2018, scoring 5/7 to finish a point clear of his closest rivals.

Ian Nepomniachtchi finished third in the World Rapid Chess Championship, which was held in Riyadh, on December 27, 2017, and competed in the Moscow FIDE Grand Prix tournament, which was part of the quaternion, in late May of the same year.

Nepomniachtchi, a Russian Grandmaster, is one of the most creative and aggressive chess players in modern chess. He plays powerful chess and somewhat relies on sharp offensive moves to unbalance his opponent.

Nepomniachtchi is an expert in both rapid and blitz chess, in addition to classical time restrictions. He presently ranks 5th on the FIDE rapid list and 6th on the blitz list as of July 2021.

Against Carlsen, Nepomniachtchi has had more success than most.

Both were born in 1990, and they competed in youth events three times between 2002 and 2003, with Nepomniachtchi winning twice.

He also beat Carlsen at the Tata Steel event in 2011 and the London Chess Classic in 2017.

In classical time controls, Ian Nepomniachtchi’s overall score against Carlsen is +4 -1 =6. So he’s basically the only player with a top score against Magnus. Although some of the games were played when they were both little, it slightly indicates how much trouble Nepo might brew up for the world champion.

So we are going to be seeing a whole lot of exciting chess in the next few months. Who do you think will win? Kindly leave your comments in the comments section below.