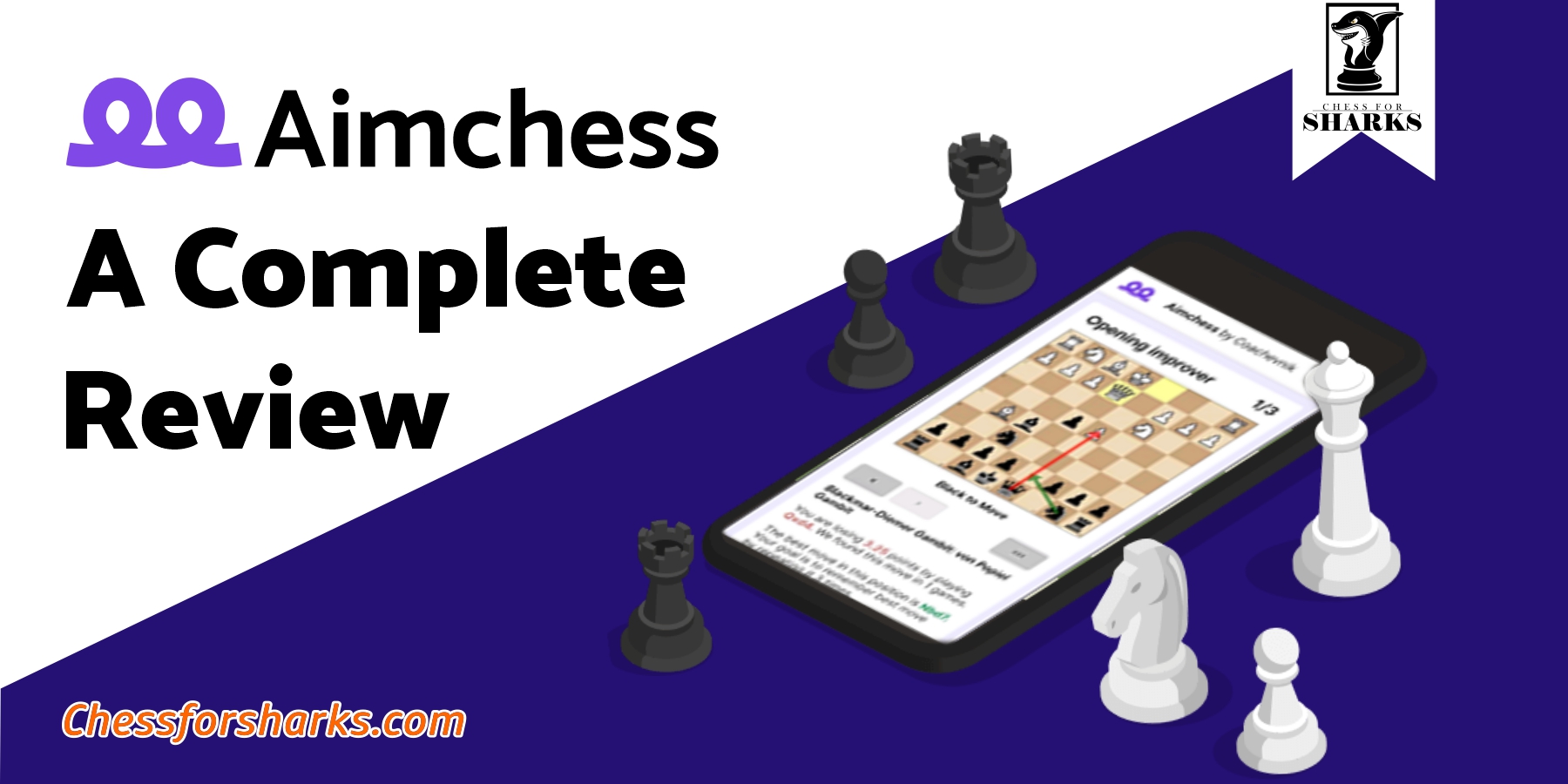 When you see a color combination of catchy shades of purple with white, the first thing that should storm your mind is Aimchess. What is Aimchess, you ask?

Aimchess is a chess platform, under the company PlayMagnus, that tracks the unique playing style of players to craft the best chess training for every individual. If you want to improve your skills as a chess player, you have to learn not to scamper for the “new game” or “rematch” button after one game ends. Instead, you should study the just-concluded game and understand where you need to improve in your chess-playing skills.

With an exemplary beautiful and adless user Interface combined with an exceptional user experience, Aimchess makes chess improvement faster and easier. It doesn’t matter when you started playing chess; whether ten years ago or ten hours ago. What matters is that your improvement is inevitable and rapid. If you’re yearning to know more about Aimchess, check out their awesome features below:

All chess players tend to blow winning positions because chess is just that complex. As an amateur or intermediate, you don’t need to beat yourself up when you lose an advantage, because there are elite players who have also squandered advantageous positions. In October 2022, Levon Aronian squandered a mate-in-one against Duda after thinking for over five minutes! The only way to improve on this problem is to train specifically on how to convert these positions to wins. Aimchess sees the game from your perspective and crafts the perfect training routine for you! Now you no longer have to worry about sealing a win from a good position!

You’re bound to struggle throughout the game without a good opening. It is advised that players take time to study their preferred openings and refrain from randomly trying out new openings, especially in tournament games. Bad openings lead to bad positions, and if your opponent practices with Aimchess, then you have huge cause for worry. The Advantage Capitalization Trainer feature will make it extremely difficult for you to salvage the game. Aimchess stops you from falling into opening traps and helps you make the best moves that get you up and running in every game.

If you’re a fan of the Bongcloud, you might want to consider playing an opening with better king safety.

Sometimes, what costs you the game is your inability to recall efficiently. What do I mean? You know how you resign after you forget about a bishop on a long diagonal—so long that you placed your unguarded queen on that square to deliver a fork via check. If you had remembered the position of the bishop, you’d have done better to find a much stronger move. Aimchess helps improve your vision of the board by testing your memory using challenges. As usual, these challenges will be personalized, and you get to strike the nail right on its head with the training.

Aimchess helps prevent you, in like fashion as the Practice Visualization feature, from making moves that force you to throw in the towel. Blunders don’t just come in the form of forgetting the position of enemy pieces. Some blunders are well-checked and cross-checked. But due to poor calculation skills, the blunders are made anyway, especially in the endgame. Aimchess technology pinpoints the areas where you often make blunders gives you the appropriate training on how to avoid blunders. It simply means that Aimchess technology gives you the “why” when calculating moves accuracy.

Aimchess tends to remind you of the mistakes you made in your previous games. You get to revisit the areas in the game where poor moves were made, and after finding the moves, you’re made to understand why the best move is the best move. You can expect corrections in all positions: how to continue an attack, how to tame an attack by your opponent, and how to control the initiative in an equal position. Chess training has never been more fun, right?

If you don’t have the ability to make these quick decisions, based on the INTUITION, mostly confidently, then you will miss out on many opportunities because you see dangers that aren’t actually real’

If the current World Champion says it, then every chess player will do well to heed his words. The desire to improve intuition is not enough to improve one’s intuition. And intuition is one of the most difficult assets to train in chess. It’s like knowing when to make a good sacrifice by just looking at the position without any real calculations. Aimchess will recommend the right dumbbells for training your intuition. How will this training be executed? Aimchess picks out a sequence of moves made by you and asks you to identify which move or moves were mistakes.

SEE ALSO: 7 Strategies You Must Know To Improve Your Middlegame

What is a game of chess without tactics? Tactics come in various forms, and the most tactics are forks and pins. As basic as they sound, they are the most known and most used tactics in all levels of chess skills. Aimchess sharpens your usage of every tactic, that is knowing where and when to apply them. Aimchess technology will place more emphasis on tactics that you tend to miss more than others. The beauty of personalized training keeps getting better and better. It’s like having a chess platform built just for you!

This feature is like a regular puzzle but of course, personalized. The puzzles are taken right out of your past games and although the mistakes will be pointed out for you, unlike the 360 Trainer, you’ll still have to search for the best move. With time, you’ll learn to make better moves in future games. Aimchess will be watching as you play.

As simple as the endgame looks, it is arguably the most complex phase of the game. A player’s options are greatly lessened and one has to be extremely careful with every move. The moves in the endgame must be made with laser precision, lest a player loses the game. Aimchess teaches important rules and theories to be applied in the endgame. The training will cut across rules like corresponding squares, Tarrasch Rule, and so on! If you can attain mastery in the endgame, get ready to experience an upward surge in strength and ating.

Aimchess reveals the secret of the great Iron Tiger, Mikhail Botvinnik through this feature. The Defender feature trains you to defend losing positions and salvage something from the game. You design a fortress to frustrate your opponent. Of course, defending a position isn’t the only aim. As a player defends, he must also look out for counter-attacking moves, in case the opponent relaxes and makes a small mistake. This feature gives you a heads up on how to maneuver around some of the most complex positions ever seen in chess. Aimchess employs the use of the positions that are most likely to appear in your games. How cool is that?!

Whether it’s playing speed chess or not, every chess player must have the ability to manage their given time. Time is an important factor of a chess game, and every player must be careful not to slip into a Zeitnot! Aimchess provides registered players with training that helps improve rapid thinking. No more wasting precious time pondering on a move that is as obvious as sunlight. If you’re one player that almost always struggles with keeping up with time, even in classical time controls, then waste no more time to become an active member of Aimchess. You’ll be trained on how to know when to calculate variations of a position before playing and how to play a good enough move that makes you think on your opponent’s time!

Blindfold chess is one of the most difficult skills in chess. We’re all so used to using our sight on the pieces on the front of us that the more we look, the less we see. Sometimes, our eyes betray us. This is when blindfold tactics come into play. You must’ve seen chess masters show off their chess prowess by playing accurate moves deep into the game without using their sight. Players like Magnus Carlsen have been involved in blindfold simultaneous exhibitions, and a round of applause is the least a spectator could do. That skill is one of the reasons why he’s the world champion. You too can get better at chess. All you have to do is let Aimchess train your blindfold tactics.

SEE ALSO: GET OUR EBOOK “LEARN AND MASTER THE GAME OF CHESS” ON AMAZON—

Playing chess has to do with more than just capturing pieces and decimating your opponent’s material. Checkmate must always carry the highest priority. In certain positions that look equal, chess players can end the game swiftly with the right combination of moves. Checkmate patterns are numerous and can be achieved using a partnership of the chess pieces at a player’s disposal. A rook and a knight can combine for the Anastasia mate, a bishop and rook can combine for the opera mate and the like. Furthermore, you get to learn and master these patterns with Aimchess.

SEE ALSO: 5 Practical Tips To Take Your Chess To The Next Level

As a chess coach, Aimchess makes your work much easier by helping identify key improvement areas in the students. India’s 36th Grandmaster Ankit Rajpara couldn’t hold back his commendation on Aimchess’s value. He said, “Since discovering Aimchess, I use it for my coaching sessions. The option to generate a list of mistakes and blown positions from a student’s recent games allows me to spend more time on instructive moments and less time reviewing games manually.”

You must be wondering how Aimchess can develop something so awesome! Well, a lot of investment has gone into designing the platform for making you a better chess player in a fun and easy way. Simply select one of the three types of subscription plans to enjoy Aimchess to the Max.
The plans include:

This plan is free, and some sweet deals come when you sign up. The standard plan provides you with one 40 game analysis per month, a weekly personalized study plan, one training session, one daily warmup, and unlimited studies!

This plan goes for just $7.99 monthly, and what you stand to gain will blow your mind! There will be NO limits to analysis reports on your games, you get x2 deeper analysis of your last thousand games online, your accounts on other chess platforms like chess24, Lichess.org and chess.com will be tracked, you get unlimited daily training, and your statistics page will be available for you to track your progress! As a cherry on top, you have the luxury of sharing data with your coach for inspection.

Lastly, the Annual Premium plan is, by far, the best deal for any chess player. The most amazing thing is that it goes for just $4.85 monthly to be paid in one yearly deposit! This plan is similar to the premium plan but cheaper!

Just when you thought it couldn’t get better, Aimchess is serving a mouth-watering promo! To get in on the action, use the code “SHARKS30” to get 30% off your subscription plan. My Annual Premium subscription plan’s up and running. If I were you, I’d dip my proboscis in this offer before it ends!

Playing chess is fun but what makes chess more enjoyable is winning. To win, you must be better than your opponent. To be better, you must study, train, and work to improve. You don’t have to spend years studying books that might bore you before you improve. While it’s certainly effective, technology has made life much easier than that. With Aimchess, you get to bypass long hours of chess-studying that might not be effective to you. In summary, hop on the train of the future now.