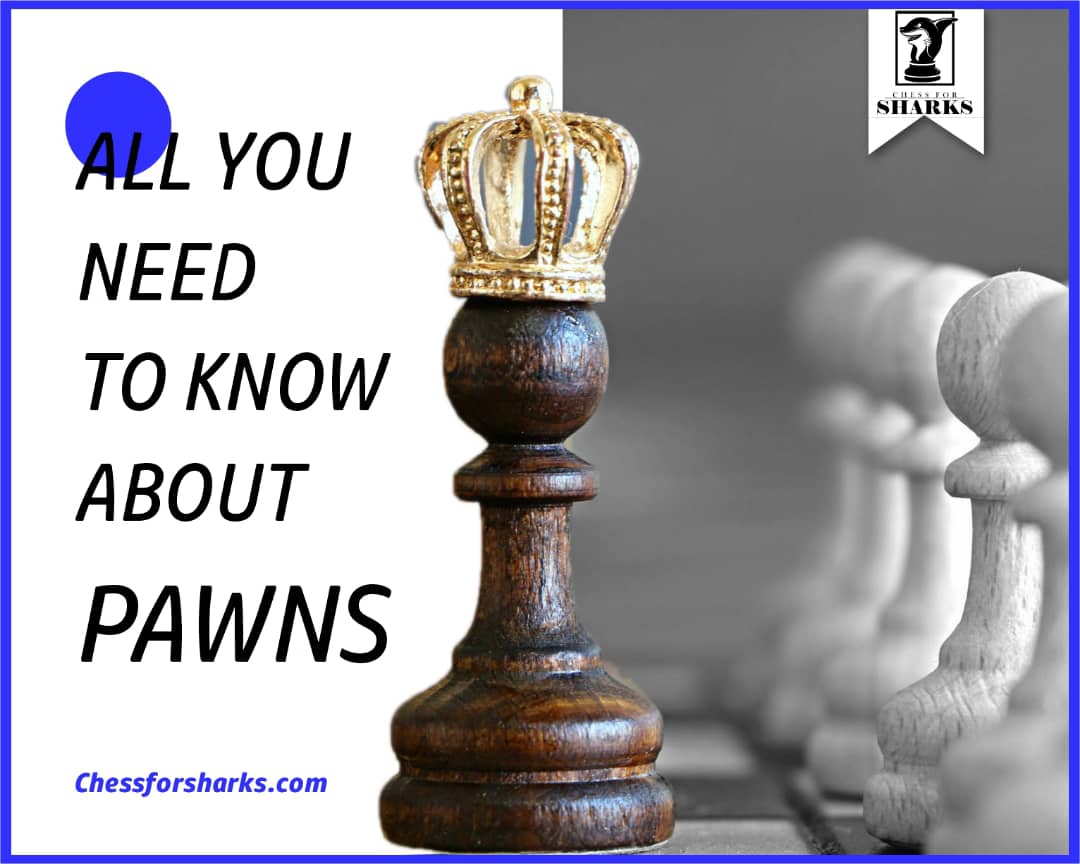 Pawns are foot soldiers in chess. They are regarded as such because they carry the least point value in a chess game. Valued at just a point, they, however, have the most population on a chessboard.

There are sixteen of these foot soldiers in a standard chess set—eight per side.

They are typically set up in front of all officers(chess pieces that are not foot soldiers) like personal bodyguards.

They move strictly forward, one square at a time. However, they can move by two squares if they’re yet to make any move in the game.

These underrated pieces capture directly diagonal to squares in front of them. For instance, a White pawn on e4 can capture any Black piece on d5 provided it is not pinned.

They are not represented with the first consonant sound of their name, unlike other pieces. They are indicated in chess notations using the square they land on. For instance, if a pawn moves from f2 to f3, it is notated as “f3”.

When a pawn gets to the back rank of the opponent, the pawn is allowed to exit the game in exchange for a Queen, Rook, Bishop, or Knight. A pawn cannot be promoted to a King. Having more than the opening number of officers in a chess game can be due to promotion. This means that a player can have 5 queens in a game. Promotion is the most common endgame strategy. It is noted using =. For instance, if a Black pawn on e-file reaches White’s back rank, it is notated as e1=Q. Underpromotion is when a pawn is promoted to an officer aside from the royalty pieces (King and Queen).

“En Passant” is a French phrase meaning “in passing”. In chess, En Passant is a rule that enables a pawn to capture an opposing pawn from another square despite the captured pawn not initially sitting on that square. One condition for En Passant is that the capturing pawn must be on the fourth rank for Black or the fifth rank for White. Another condition is that the pawn being captured must be moved by two squares on its first move, and it must be placed directly beside a pawn in an adjacent file. The last condition is that an En Passant must be executed among opposing pawns on the same rank.

An example of en passant is when a black pawn is on a4 and a white pawn is on b2. Then the White pawn moves by two squares to b4. The Black pawn can capture the b4 pawn and land on the b3 square. En passant only lasts for one turn. This means that it expires as soon as a player chooses not to exercise the rule when the chance arises.

Pawn moves define many openings such as Benko’s opening, Larsen’s opening, English opening, etc. They also define certain opening defenses such as the modern defense, Philidor defense, Sicilian defense, and so on.

An outpost in chess describes the positioning of an attacking piece. It is when a piece is firmly mounted in the opposite half of the board. A pawn plays a crucial role in determining outpost pieces. A pawn has the power to support or repel an outpost piece. A piece is referred to as an outpost piece when it is stationed in the opponent’s half or a rank near the opponent’s half, protected by a pawn and unable to be attacked by pawns on neighbouring files. In summary, pawns determine outposts.

Pawns can be great attacking and defending assets. Chess players must not shy away from advancing pawns to win squares in the opponent’s territory and acquire more space to boost the effectiveness of their pieces. The act of advancing one’s pawns is called Pawn Pushing. Although Pawn Pushing is a great way to attack, it can also cause some defensive problems due to squares left unprotected. On the other hand, pawns are defensively excellent because a player would hardly prefer to trade an officer for a common pawn. Hence, pieces and squares protected by pawns have a lesser probability of being exploited.

A Pawn Chain, also known as Connected Pawns is an occurrence when a pawn is aligned diagonally with the pawn on its adjacent file. The longer the pawn chain, the better the chances of winning a game of chess, especially in the end game.

This is when a pawn can no longer be interrupted by opposing pawns on neighboring files and has no pawn in front of its path to promotion.

This is when a pawn is without other pawn support of either side of its neighboring files. Lone pawns tend to be easy targets for opponents. Passed pawns are excellent assets in endgames, and many top players have given credit to this strategic tool.

Having two pawns on the same file is called Doubled Pawns. This occurrence weakens the structure as the pawns would be unable to form an effective pawn chain. Doubled pawns could sometimes lead to lone pawns.

Pawns are useful in several openings like we have already stated. Gambits like the Englund Gambit, Queen’s gambit, King’s Gambit, and Danish gambit are typical examples where pawns are crucial in gambit execution. Similarly, pawns are easily sacrificed to execute various forms of tactics such as decoys, zwischenzugs, and discoveries. Lever by pawns is when a player sacrifices a pawn to ruin his opponent’s pawn structure and proceed with an attack, usually based on corresponding squares. This means that levers could serve as a reserve tempo.

Pawns can be used to execute traps such as the Noah’s Ark Trap where pawns confine an opposing Bishop with the aid of the Bishop’s allies.

Some legendary players have made some appraisal comments for pawns. These quotes are as follows;
“Passed pawn is a criminal who must be kept under lock and key. Mild measures such as police surveillance, are not sufficient”

“A passed pawn increases in strength as the number of pieces on the board diminishes.”

“The pawns are the soul of chess.”

Dunsany’s chess, also known as Horde chess, is a pawn-inspired chess variant where 36 pawns face off against the standard number and arrangement of pieces.