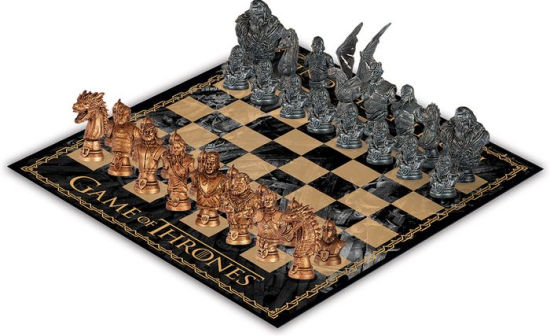 It is not news that chess is a way of life. An excellent chess player can see life through the lens of the beautiful game. Therefore, it doesn’t come as a surprise that there are some adaptations of the game of Chess in the film industry.

One film that strongly relates to chess is the critically acclaimed HBO series: Game Of Thrones.

Game Of Thrones(GOT) was a television series that aired from April 17, 2011, to May 19, 2019. It had eight seasons with seventy-three episodes. GOT depicts the struggle for power among the different families of the land of Westeros. The film’s storyline is similar to a chess match that there is even a custom Game Of Thrones chess set!

This article will focus on the Game Of Thrones chess set and explain how the characters in the film fit the profiles of chess pieces.

READ ALSO: Can A King Kill A King In Chess?

You can find the Game Of Thrones chess set online on the ChessUSA website. It consists of 32 intricate resin chess pieces on a custom Iron Throne-themed board, featuring an antiqued metallic gold checkerboard and a dragon scale textured back wrap. Each piece is securely packaged in die-cut foam, ready for fans to display the powerhouses of both sides and to continue the epic battles at home.

CHARACTERS IN GAME OF THRONES AND CHESS PIECES

Although Geoffrey is undoubtedly one of the most hated characters in the series, he fits the profile of a king quite nicely. For starters, he is an actual king. He also rarely gets involved in the action and prefers to hide between the castle walls away from danger. This is very similar to the king in a chess game. The king is not a fighting piece and has very limited mobility unlike other chess pieces on the board. The king prefers to hide behind other pieces and will often castle in a chess game.

The Queen in chess is the strongest and the deadliest piece. It commands a lot of squares on the board and can move unopposed. Cersei and Daenerys are no exception. While they both were on different sides (Cersei was the Queen of King’s Landing and Daenerys was the Khaleesi of the Dothraki), they wielded incredible power and authority.

An example of their devastating powers, similar to the Queen in chess, is shown when Cersei uses Wildfire to burn down the Great Sept of Balor, killing all the people trapped inside. The chess queen is also capable of unleashing similar terror when she hits the opponent with series of checks that fork other pieces. Daenerys also displays a similar power when she single-handedly destroys King’s Landing with her dragon.

The knight is known for its unique powers on the chessboard. It is the only piece that can jump over other pieces, giving it a special edge. Jamie and Brienne are no exception. They both are excellent knights with very rare and admirable fighting skills.

The bishop in chess is a “silent assassin” due to its ability to move quickly on the diagonals of the chessboard. Varys and Baelish are very much like Bishops in a chess game. They both have a wide network of spies that provide highly sensitive information, making them very quick in crushing foes and people they deem threats to their interests. They are also very brilliant strategists.

The Rook serves as a protector of the king in a chess game. By performing the act of castling, the Rook protects the king from enemy attacks. Sandor was in charge of protecting Geoffrey, who was the king.

The Unsullied are a group of mercenaries who work for the highest bidders. They have no will; they only follow their master’s orders and march forward into battle without hesitation. The pawns on a chess board are very similar in that regard. They can only march forward and are considered very expendable.

And there you have it! The Game of Thrones chess set and the film’s similarities to the chess game is explained.