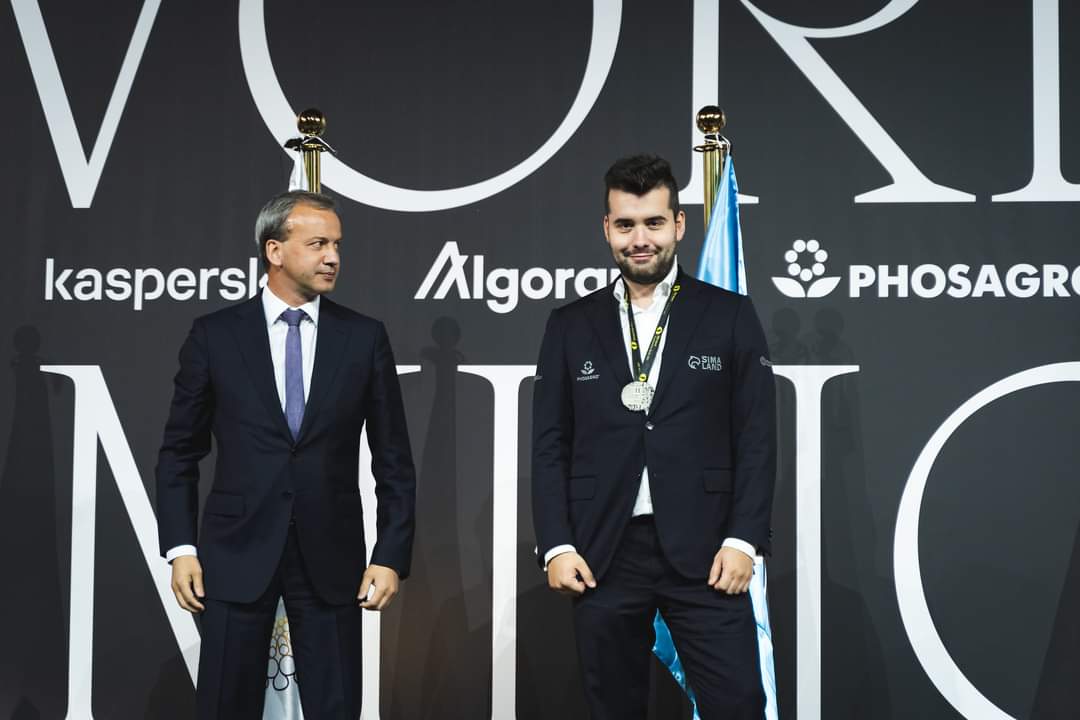 Ian Nepomniachtchi, former world championship contender has come out to clear the air regarding the recent Dubov vs Russians controversy.

In an interview with Vladimir Barsky of the Russian Chess Federation site, Ian maintained the stance that Dubov should have remained neutral – implying no active participation in either teams. However, Ian noted that Dubov deserves some appreciation as “his greatest winning chances in individual games came after ideas that apparently belong to Daniil”.

Check out the translated interview below:

Ian Nepomniachtchi – First of all, I think, it’s an aspect of the business, because Daniil has been cooperating with Carlsen’s team since 2018. On the other hand, we also worked together for about a couple of years, so it was more logical for him, in my opinion, to remain neutral. But on behalf of the team, we must thank Dubov, because I had the greatest chances of winning in individual games after those ideas that, apparently, belong to Daniil’s handiwork.

Vladimir Barsky – Which games do you mean?

Ian Nepomniachtchi – First of all, there is the second game. A very interesting idea in the Catalan – you have to give it credit. If before that game there were some doubts as to whether Daniil was part of Magnus’s team or not, then after it they practically disappeared. Also, as far as I understand, in the sixth game the order of moves wasn’t chosen without the influence of Dubov. In principle, in both cases, I had pretty good chances of winning. So, among other things, I want to congratulate him on his great success!

Vladimir Barsky – Dubov believes that Magnus’ team has surpassed yours in opening preparation. What do you think of that?

Ian Nepomniachtchi – It’s very difficult to say. The openings were pretty specific. We tried to play in a principled manner, tested various concepts in the Anti-Marshall, while our opponent made different “serves”. It seems to me that now it is very difficult to get anything at all with White. In the second game, however, a rather uncontrollable struggle ensued – that’s the success of Magnus’ coaching team and Daniil personally!

But joking aside, the idea was very good. And so, we at times got slightly better, or much better, but we must give credit to Magnus: he played strongly coming out of the opening. In most games with black, he showed an extremely high level. Most likely, his knowledge at that time was already running out, but, apparently, there was a clear understanding of what to do next. He made 4-5 moves, after which the position had largely dried up.

Vladimir Barsky – Did Carlsen play strictly on the defensive with Black?

Ian Nepomniachtchi – Objectively speaking, playing with Black to seize the initiative is quite optimistic in a match situation; this should only be done if absolutely necessary. Neither side was concerned about getting some kind of big opening advantage. You should also note a very practical decision: after taking the lead, he stopped playing for a win with either colour. This decision surprised me a little, disconcerted me, but it fully justified itself. If I’d blundered less, the story would no doubt have been a little different, but it was very revealing, for example, that twice in the Petroff he refused to go for a fight with White. Especially the move 10.Qe1+ in the eighth game speaks for itself. This was part of a strategy that was successful.

Vladimir Barsky – Why didn’t you reply 10…Qe7? After all, that would immediately turn out to be a draw, and at the press conference you could have poked Magnus — so you’re scared of the Petroff?

Ian Nepomniachtchi – Probably at that moment, I was no longer able to make optimal decisions. Frankly speaking, I didn’t see a big difference between 10… Kf8 and 10… Qe7.

Vladimir Barsky – After 10 … Qe 7 the queens are immediately exchanged, but as it was they remained on the board.

Ian Nepomniachtchi – I agree. But it seemed to me that with a fairly high degree of probability the queens would be exchanged soon anyway, and after 10… Kf8, I did not see a fundamental difference. Of course, this suggests that my condition at that moment was already extremely far from optimal. I needed a rest day.  It came right after that game, but it was already a little too late. Of course, in 9 cases out of 10 the move 10…Qe7 would have been made without thinking. There’s some irony in the fact that while Magnus was thinking for 40 minutes I came to the conclusion that it was very likely he’d play 10.Qe1+ and the game, essentially, would be over — more likely than not after that there would have been some pretty routine exchanges.

In my thoughts I was probably already elsewhere — prematurely, before the whistle, while in fact after 10…Kf8 we got the kind of position… Most likely it’s still equal, but there isn’t and can’t be any clear draw; even the pure bishop endgame will be unpleasant for Black because of the move h5, despite the entirely symmetrical pawn structure.

And then, leaving the blunder 21…b5? 22.Qa3+! aside, the character of the struggle was already favourable for White, on the whole. Not a drop of risk and long-term pressure. That doesn’t of course absolve the side playing Black; after 10…Kf8 the position turned out to be a little more unpleasant than I expected. Why not 10…Qe7? It’s better to leave that as a rhetorical question.

Vladimir Barsky – Do you still have to analyze all this?

Ian Nepomniachtchi – More likely than not, there’s an adequate explanation, but it won’t fit in the format of a blitz interview. Overall, when I was awaiting the move 10.Qe1+, it seems that mentally I was already on the rest day.

So what do you think about Nepo’s comments? Will love to hear your views in the comments section!