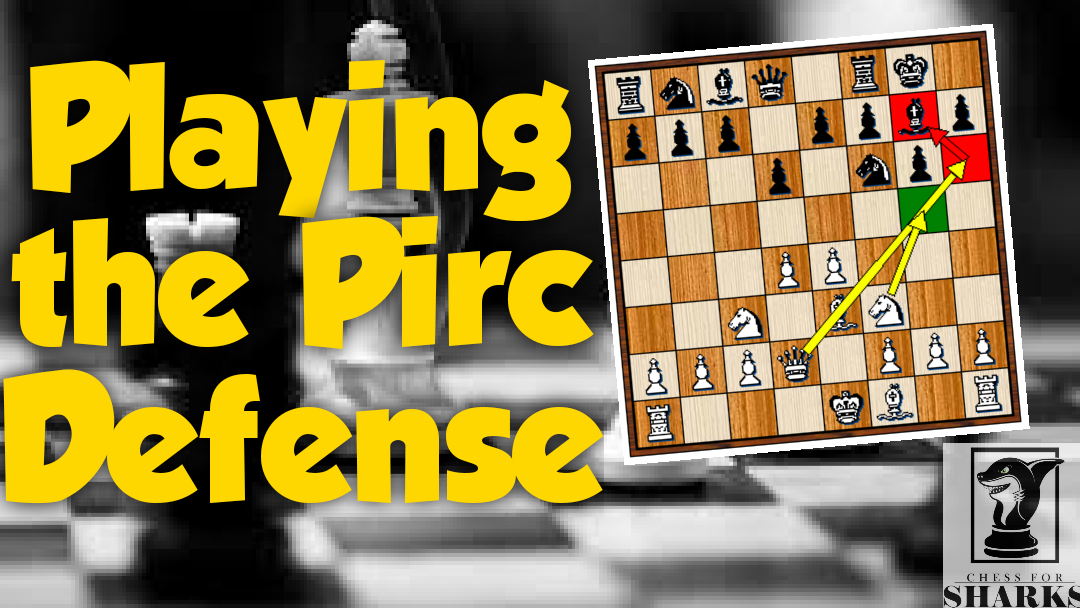 The Pirc Defense is one of the most popular openings in chess. The opening which can be aggressive sometimes can lead to a very complex game. If you want to improve your knowledge of this solid and counter-attacking opening, then you’ve come to the right place. This blog post is a guide to playing the Pirc Defense.

The Pirc Defense is an opening that, although relinquishes the centre to White early on, allows Black to carry out counter-play during the game. It was founded by Yugoslavian(now called Slovenia) GM Vasja Pirc. It is characterized by the opening moves

This is the main line.

It is playing 4. f4 as a continuation to the opening main lines ending with 3 … g6

This variation appears to be more advantageous for White. It was a favourite of American Legend Robert Fischer. The f2-f4 advancement gives White more control of the centre. The f4 pawn claims the e5 and g5 weak squares which could lead to an attack through the centre or a kingside attack.

This variation would excellently suit players that enjoy open games and enjoy being creative with their attack.

The developed bishop poses a long-term threat on the e4-h7 diagonal, following the advancement of the e pawn. This pawn would, most likely, be captured by the f4 pawn, creating even more attacking opportunities against Black on the f file after a kingside castle for white.

This attack called 150 attack is also a variation to consider when playing as White against the Pirc defense. Players of intermediate strength should consider playing the 150 attack because it takes advantage of Black’s minor kingside weaknesses by applying pressure on the g7 fianchettoed bishop to further weaken the h6 and g7 squares. Playing Nf3 instead of f4 like the Austrian attack variation amplifies the kingside attack following the Be3-Qd2 battery to execute the kingside attack.

This is another variation for White to consider when playing against the Pirc defense. Compared to the 150 attack, the Argentine attack is said to be more passive by playing f2-f3 setup to prevent Black from playing the malicious Ng4.

It is playing 4.Nf3 as a continuation for the Pirc defense.

This system can lead to the 150 attack for a more aggressive approach, compared to the Argentine attack with 4.f3. After 4… Bg7 5.Be2 0-0 6. 0-0, Black is forced to either play passively to White’s initiative or go for a gambit through 6… e5. Black loses a pawn but gains the initiative if White accepts the gambit or declines through 7.e5. Similarly, the classical system variation of the Pirc defense can be transposed to the Dragon variation of the Sicilian defense via the following sequence of moves; 6…c5 7.Be3 cxd4 8.Nxd4.

From this position, Black can snatch the initiative by playing 8… e5 to force the d4 knight to retreat. 9.Nb5 also appears to be a decent move for White but Black could continue with development by playing 9… Nc6 with Be6 incoming.

Robert Byrne invented this variation in the 60s. After the main Pirc defense line, the Byrne variation is executed by playing 4.Bg5.

This move forces Black to keep the e pawn stationed where it is to avoid a pin to the queen. Black’s h pawn is tempted to play h7-h6 which is a move that might create weak squares further expose the kingside as the game progresses. On the other hand, Black can reply to this minor exchange threat by playing a flexible c6 which allows the Black queen a route to creating problems for White’s king on a5.

White’s reason for playing 4.Bg5 could be to follow it up with Qd2, creating a bishop-queen battery to attack the c1-h6 diagonal when Bh6 comes in. Playing the 4…Bg7 book move could make Black lose a tempo. This is why c6 presents more flexibility. The Byrne variation can also play out on move 5 with 4.Nf3 Bg7 5. Bg5.

This variation of the Pirc defense is attained on move 3. White’s opts for 3.f3 to protect the e pawn being threatened by Black’s f6 knight, instead of the traditional 3.Nc3. A lion’s jaw has a host of sharp strong teeth ready to crush whatever comes within its grasp. Similarly, this position presents a corresponding illustration on the kingside as White strengthens the squares on the area to prevent unexpected attacks from Black’s f6 knight and c8 bishop.

Generally, the Pirc defense appears to relinquish the centre early on and focuses on counterattacks. In the lion’s jaw variation, White can be said to be quite timid in his approach which could be to Black’s advantage if Black plays for the centre with e7-e5.

By continuing the mainline, one plays the Czech defense or Pribyl System with 3…c6.

The Pirc defense has been successfully deployed in the following games:

The Magician from Riga saw out the Iron Tiger in this 23-move game. Regardless of his firm defensive abilities, Petrosian could not help but succumb to the pressure of Tal’s brilliance against the Pirc defense.

I  It’s always a difficult task to play against a reigning World Champion but to win? USING BLACK?? That’s simply astonishing, and as much as we ought to give maximum credit to Zurab Azmaiparashvili for this brilliant feat, we must also acknowledge the opening repertoire he employed which is the Pirc defense.

In a fine display from one of the strongest players to have never become World Champion, we see the Pirc defense deployed beautifully to win a game against the creative legend, Fischer.