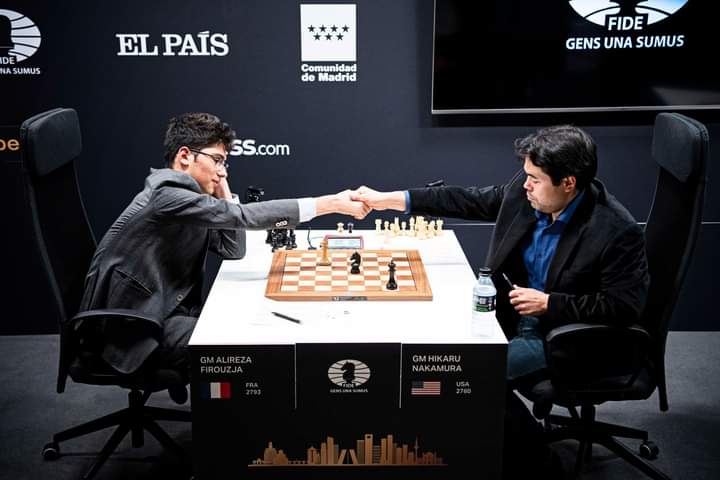 Going into Round 3, Ian Nepominiachtchi and Fabiano Caruana were the sole leaders with 1.5 points each. In the previous round, all of the games except one were drawn. The only decisive match was Hikaru Nakamura v Teimour Radjabov which ended with Hikaru picking up a win. Round 3 of the FIDE Candidates Tournament 2022 saw Teimour Radjabov take on Ian Nepominiachtchi, Fabiano Caruana faced Jan-Krzysztof Duda, Ding Liren took on Richard Rapport, and the most awaited clash of the speedsters, Alireza Firouzja v Hikaru Nakamura.

READ ALSO: 4 Of The Best Chess Openings For Black

Nepo And Radjabov Both Settle For A Quick Draw

Round 3 of the FIDE Candidates Tournament 2022 saw Nepo and Radjabov face off. Coming into the Round, Nepo was tied with Fabi as the tournament leader with one win and a draw, while Radjabov had only half a point as he drew his game against Alireza in Round 1 and lost to Hikaru in Round 2. The game started with Radjabov opening with d4. Nepo responded with Nf6. At first, it looked like we were going to have an Indian game but with g3 and then 5.Bg2 from Radjabov, the game transposed into the Catalan Opening.

The players showed no signs of wanting to go for anything aggressive, and the early queen trade on move 7 clearly showed that there would be no fireworks on the board. A few piece exchanges followed, and as early as move 20, all of the minor pieces were exchanged, and the players went into a rook endgame. The pawn structure of both sides was identical, with both players having four pawns on the kingside and one pawn on the queenside.

Quiet Game Ends In A Draw

Neither player attempted to bring their king into the thick of the action. Radjabov then doubled his rooks on Nepo’s seventh rank threatening to capture the f7 pawn, but with Nepo’s king and rook guarding the pawn, there was little promise of any advantage for white, and the players agreed to a draw on move 30.

The Hunt For A First Win Continues For Ding

Coming off the back of a draw in Round 2 and a loss in the tournament’s first game, Ding faced Rapport in Round 3 with the white pieces. It seemed d4 was the go-to move in this round, as like in the Nepo v Radjabov game, Ding opened with d4. Rapport replied with Nf6 and picked the Grunfeld defense as his weapon of choice.

The game then continued in true Grunfeld fashion with Ding having a huge pawn center with massive center control and Rapport trying to undermine that control with his fianchettoed bishop on g7 and attacking the flank with c5. The game continued with the players playing known Grunfeld lines. This continued until Rapport deviated with 14.d6 instead of the more popular e6. Rapport offered an early queen trade on move 15, but it seemed Ding was not in the mood for a quiet game and declined with 16.Qd3. Things started looking interesting when Rapport gave up his rook on d8 for Ding’s dark square bishop.

Ding then missed the chance to take a significant lead in the game on move 23, where he played Qxe2 instead of Qxd8. After that miss, the engine only gave Ding a slight advantage, whereas the position was outrightly winning if he had played Qxd8.

But the game wasn’t over yet. Ding still had a queen, rook, and three pawns, while Rapport had a queen, bishop, and four pawns. The next few moves consisted of checks and the players trying to put their pieces on the best possible squares. Ding then gave up his rook for Rapport’s bishop, and from that moment, the game looked destined to be a draw. After a few repeated checks, the players shook hands and agreed to a draw.

Fabiano Caruana, the tied leader of the Candidates Tournament, going into Round 3, faced Polish grandmaster Jan Krzysztof Duda who was on 1 point after two draws in two rounds.

Fabi opened with e4, and Duda decided to go with the Najdorf Variation of the Sicilian Defense.

It looked like Fabi was also in a fighting mood as he went for an early queenside castle on move 10.

In true Najdorf fashion, Duda began his queenside expansion with 11.b5. First, a trade of minor pieces occurred on the d5 square, and then another minor piece trade on the b6 square.

Fabi looked to place his knight on the c6 outpost, but Duda had none of it and quickly went for a trade. Fabi then grabbed the d6 pawn, and a queen trade occurred.Going into the endgame, both sides were on fairly equal standing as they both looked to put their pieces on optimal squares.A rook trade occurred on move 28, and the second pair of rooks were traded off on move 33. The game was down to a bishop v knight endgame with both sides having six pawns each, but Fabi had the numerical pawn advantage on the queenside with three pawns to Duda’s two.

Another Draw Is Agreed On

It seemed Fabi and Duda were poised to follow in today’s fashion of drawn games as both players engaged in a capture fest that ended in a draw due to insufficient material on move 51 with only the kings and one knight on the board.

Clash Of The Speedsters

Alireza v Hikaru was no doubt the most anticipated game in Round 3. So naturally, everyone was eager to see the two speedsters battle it out.

The game started with the players going for the Nimzo-Indian Defense. As expected, things started to get crazy early on as Alireza played 16.Nxg5, giving up his knight for two pawns. However, it was a temporary sacrifice as he would win the piece back. Hikaru also managed to win his pawns back, and a queen trade happened.

As they entered the endgame, both players started pushing their pawns to promotion. While Hikaru was pushing on the queenside, Alireza focused on pushing his two connected passed pawns on the kingside. Despite the capture frenzy that occurred earlier in the game, the engine still gave the game situation equal for both sides.The players then proceeded to trade all the pawns, and like the three previous games, Alireza v Hikaru ended in a draw.

READ ALSO: What Is A Blunder In Chess? Know These Facts!