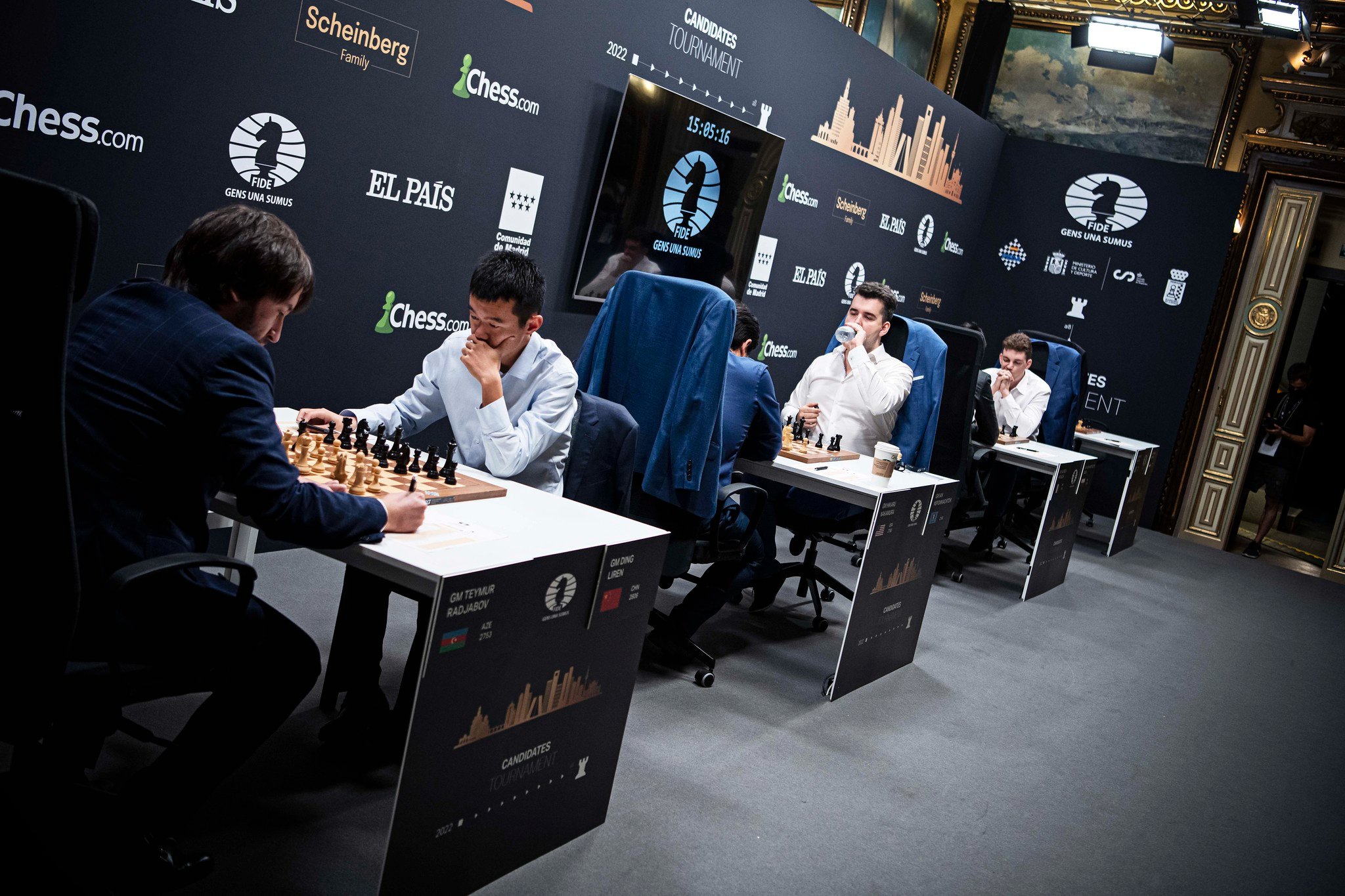 Ian Nepomniachtchi came into Round 5 as the sole leader, thanks to his convincing win against Alireza Firouzja in the previous round. He aimed to carry on his winning form but was lucky to escape with a draw in round 5 of the FIDE Candidates Tournament 2022. We now take you through a detailed summary of the round.

Round 5 of the FIDE Candidates Tournament 2022: Shortest Game Of The Tournament So Far

2 out of 5 of the unbeaten Candidates went head to head in game 1 of round 5. Rapport hoped to get his first win with the black pieces when he went for the Sicilian Defense. It didn’t take long for Rapport to offer a piece with 8…Na5. Caruana ignored the offer with 9.Qd3 first piece exchange of the game came when Rapport traded Caruana’s Knight on b to create a slight weakness on the queenside.

The fight for the centre intensified with both sides going for opposing fianchettoed bishops with 10…Bb7 and 11.Bg2. 13.g5 was the first inaccurate move of the game as the engine slightly smiled at Rapport’s position. Like Stockfish suggested, Rapport proceeded with a pawn storm on the queenside with a5-a4. At the same time, Caruana continued to develop, focusing on the centre and the kingside.

Rapport played Bb4 on move 15 to pin the Knight to the Queen. The move forced a slight panic from Caruana, who moved to unpin his Knight, threaten the pinning bishop and target an exposed g-pawn. Stockfish was slightly displeased with this move from white, but black soon mismanaged his slender advantage once again. Black played 16…Qa5?! to protect the bishop on b4.

From this point, the game was as good as drawn as Caruana captured the g pawn while Rapport continued his pawn clamp down on the queenside. After eliminating the pawn protecting white’s c-Knight, the Knight scrambled for safety. That was the beginning of trouble for the Queen in no man’s land. 19…e5 sealed the exit route while 20.f5 barricaded the exit for the Queen.

Black seized the opportunity of a restricted Queen to force a draw by repetition, which was the shortest game in the tournament.

Round 5 of the FIDE Candidates Tournament 2022: Caruana Vs Rapport

READ ALSO: It’s A Fiesta Of EPIC Truces In Round 3 Of The FIDE Candidates Tournament 2022

When Will Ding Hit Form Again?

Radjabov managed to spare his blushes after King Ding flunked another winning position to seal another draw. 1.d4 led to the Nimzo-Indian defence. Both sides developed expertly with fianchettoed bishops that got traded with 14…Bxg2 15.Kxg2.

Radjabov made the first inaccuracy of the game with 19.Nc4?! because it didn’t serve any specific purpose in attack. Stockfish gave a -0.5 evaluation, which Ding maintained with a few solid moves. The evaluation moves to -1.2 after 26.h3? which is intended prophylaxis meant to stop white’s f-Knight from advancing.

That motive was short-lived as the f-Knight was played to g4 after 30.h4. Conservative play caused Radjabov to not take advantage of 35…Rc4?!. Instead of 36.Nf5, he played 36.Qe2. Returning to d3 proved that Radjabov wasted tempo, which Ding couldn’t harvest.

Spectators must have been convinced Ding would clinch the win when he had a -3.2 evaluation following the 39.e5? mistake, but an inaccurate 39…fxe5 and a blunder g6 settled the game for a draw.

Round 5 of the FIDE Candidates Tournament 2022: Teimour Radjabov Vs Ding Liren

Duda Comes Out Unscathed Against Alireza

The two youngest Candidates in the field played a near-perfect game. Duda went for the Petrov’s Defense 1.e4 e5 2.Nf3 Nf6, while Alireza proceeded with the Classical Variation Nxe5.

11…Bxd3 12.Qxd3 saw the first exchange of the game before 16…Rxe1 17.Rxe1 saw rooks come off the board. The game had no complicated position as both players opted to play solidly. 19.cxb5 created an isolated central pawn for Alireza, but that was no problem in the long run.

The players accepted almost every exchange offer and were in the endgame before move 30. Both players realized the clear equality in the position and agreed to a draw on the 36th move.

Round 5 of the FIDE Candidates Tournament 2022: Alireza Firouzja Vs Jan-Krzysztof Duda

One could say that the blinding lust for pawns cost Nakamura the win in this game because he had a good position. We saw the Petroff Defense again in this game, and it was all natural moves until move 16. Rather than retreating the Queen in response to a 16.c4 threat, Nepo advanced his Queen to e4, in line of a discovered attack with a rook.

The position went from awkward to bad for Nepo when he responded to the 17.Bf1 discovery with 17…Qg4, another inaccuracy. Nakamura didn’t let his foot off the gas in pressing the Queen as he played 18.h3, but Nepo used an intermezzo 18…Rxe1 to cool off some steam. Nakamura then forced the black Queen to his back rank as he firmly controlled the open e-file.

Opting to reduce the pressure on Nepo’s Queen caused Nakamura to lose tempo and relinquish his slight advantage, to his utter disappointment. As a result, Nakamura couldn’t help but force the game into a draw by repetition. Meanwhile, the World Champion urged Nepo to “be a shark” and fight for a win rather than settle for a draw after an escape.

Round 5 of the FIDE Candidates Tournament 2022: Hikaru Nakamura Vs Ian Nepomniachtchi

READ ALSO: How To Be A Chess Grandmaster: The 3 Simple Norms