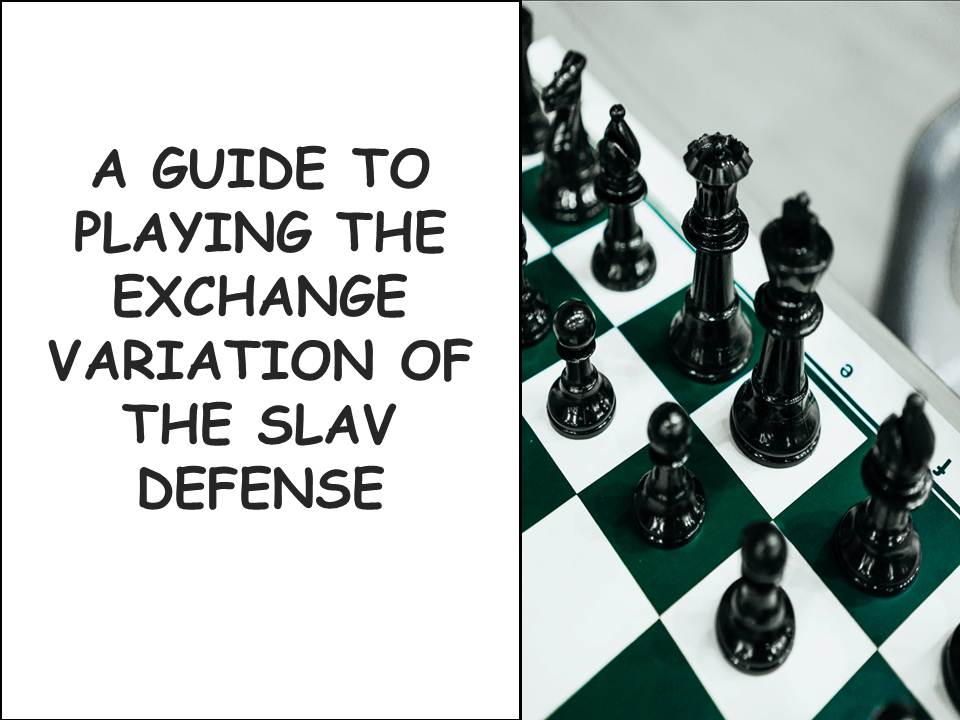 The Slav defense is one of the most popular defenses to the Queen’s gambit and this defense can arise after 1. d4 d5 2. c4 c6

2… e6 leads to the Queen’s gambit declined. By playing 2… c6, Black maintains the pawn tension in the center as taking on c4 will hand over the central squares to white after Nc3, Nf3, e4 e.t.c. This move also avoids lines where e6 is played early hemming in the light squared bishop(one of the drawbacks of the Queen’s gambit declined). The light squared bishop can be developed comfortably on the f5 or g4 square before the e6 pawn move can be played.

In this article, we’ll focus on the exchange variation of the Slav defense. Just like the name suggests, white releases the pawn tension early with 3. cxd5 and aims for quick and easy development of his pieces. This variation is a peaceful line and does not really give white any opening advantage as it is very drawish. However, Black must be very careful as lack of caution may land him in serious trouble. This variation can particularly be useful when playing a higher rated opponent to get a draw or when you don’t want to enter your opponent’s preparations in the Slav defense.

The Slav defense is normally used by grandmasters looking for quick draws but if your opponent is not a titled player, chances are that he/she may not be able to play accurately in this variation. Many White players have obtained victories playing against the Slav defense because of the exchange variation due to the fact that most players handling the black side do not know the plans or the ideas associated with the opening.

We are going to analyze the mainline and look at possible plans for white and black :

The exchange that brings about the variation, It avoids some of the complex and theoretical lines that can arise from the Slav defense.

would be wrong as white would play 4. Nc3 gaining a tempo and then 5. e4 grabbing important central squares]

Both players stive for quick development of pieces.

By getting this bishop out, Black is ready to follow up with the e6 pawn move to develop the dark squared bishop.

Instead of 6… e6, some players prefer 7…a6 preventing the bishop pin on the c6-knight. The move can support a later b5 pawn push grabbing space on the queenside. White can however try to make use of the noticeable holes incurred after a6 with ideas of Nc3-a4-c5 or Nc3-a4-b6.

One of the critical ideas in this opening. In most cases, white will exchange his light squared bishop with the c6-knight creating a weak c6 pawn and a weak c5 square which can be exploited by doubling rooks on the c-file (Nc3-a4-c5 works well here). Black needs to get rid of this pin as white threatens Qa4 and Ne5 placing more pressure on the c6-knight.

The best response! Black immediately unpins the knight, prevents Ne5 and supports the c5 pawn break after the c6-knight has been exchanged.

Black defends the knight. If the knight at d7 was absent, then Qxa7 would have won white a pawn.

Qxa7 but black gets ample compensation after 11… Bd3! preventing castling and keeping the white king in the center.]

In conclusion, this opening is generally drawish and requires technique but it can be a very interesting weapon against an unsuspecting player. How about you give it a trial in your next game to get a feel of the resulting positions; We’ll love to get your feedback!