The 1 Chess Player Who Never Lost

When asked about a chess player who never lost, only one name comes to mind

A brief history of Bobby Fischer

Among the chess greats, Bobby Fischer might be the only Chess player who never lost, the Chicago-born, Brooklyn-bred genius who became one of the greatest chess players the world has ever seen. Fischer was the most powerful American player in history, and the most enigmatic His sister, Joan, bought him, then at age 6, his first chess set and taught him the basic moves. By 8 he was taking lessons at the Brooklyn Chess Club; by 12 he was holding his own among America’s strongest players, who gathered at the Manhattan Chess Club and the Marshall Chess Club. His adult opponents called him “the Boy Robot” and “the Corduroy Killer,” for his unwavering wardrobe and insatiable will to win.

After scaling the heights of fame, he dropped out of chess after refusing to defend his world championship title because he wasn’t in terms with FIDE. Fischer would later defy a national order, imposing an exile on himself in Budapest, Japan, possibly in the Philippines and Switzerland, and finally in Iceland, moving there in 2005 and becoming a citizen. He died on Thursday in Reykjavik, Iceland at the age of 64.

Check Out: Bobby Fischer Vs Garry Kasparov: A Clash Of Titans

For decades Fischer lived in obscurity. In 1992, he came out of long seclusion for a $5 million rematch against his old nemesis, the Russian-born grandmaster Boris Spassky. He was triumphant winning the rematch handily. Fischer had wrested the world championship from the great Soviet-Grandmaster Borris Spassky to become the first and, as yet, only American to win the title, one that Soviet-born players had held for 35 years!

Chess players generally think that Fischer agreed to the 1992 Spassky match for the money. But the opportunity to reassert his primacy was attractive as well. The games were played in a surreal atmosphere in Sveti Stefan, a resort in the Yugoslav republic of Montenegro, just a few miles from the bloody warfare then raging in Bosnia.
Although the match was unsanctioned, a banner was put up proclaiming it to be the world chess championship.

At a press conference, Fischer held up a letter from the Treasury Department warning him that his participation in the match, considered an economic project, would constitute defiance of American sanctions against Yugoslavia. He would be subject to fine and arrest, he was told. In front of more than 150 reporters, he spat on the letter.

Fischer’s victory was widely seen as a symbolic triumph of democracy over communism, and it turned the new champion into an unlikely American hero. He was invited to the White House by President Richard M. Nixon, interviewed on television, wooed unsuccessfully by commercial interests. Sales of chess set skyrocketed; so did fees for chess lessons. He also completed “My 60 Memorable Chess Games” (1969), a classic collection that remains required reading for serious players.

How did he play chess without losing? 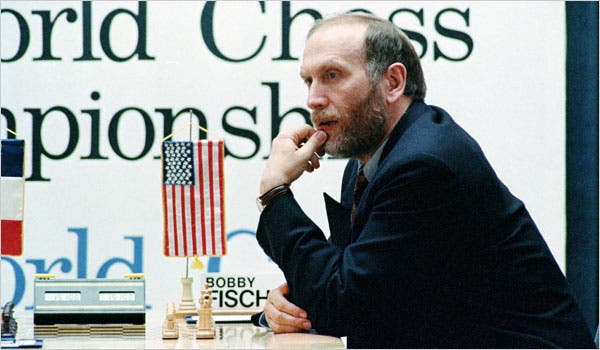 Before anything at all, there’s a need to correctly point out some misconceptions between matches with games.
A game is a single game.
A tournament is a series of games between multiple opponents (there are different structures, Swiss System and Round Robbin being the most common).

A match, however, is not a single game. It is a series of games, one on one. For example, contests for the World Championship are decided in the end with one-on-one matches.
And, of course, Fischer lost games, He’s human after all. There are only three matches played by Bobby Fisher that can be attributed to a loss.