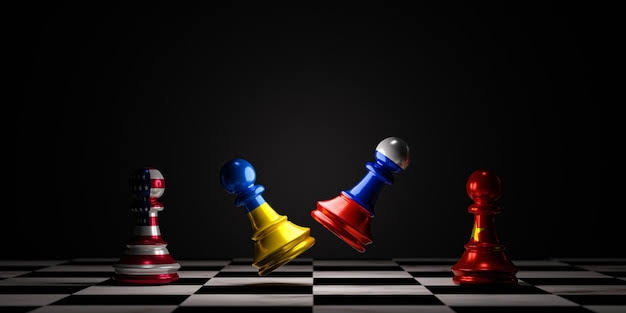 The war in Eastern Europe has received massive attention from around the world, and the chess community has not abstained from the matter. So far, we’ve seen several entities stand against and, rather surprisingly, in support of the war between Russia and Ukraine.

The World Champion Calls For Peace

Magnus Carlsen might be the current best warrior on the chessboard, but war affairs that stray from the chessboard, he condemns. The owner of the Play Magnus group quoted a tweet by one of his chess brands, Chess24, calling for peace.

Nepo was one of many top Russians to frown at his country’s military actions against Ukraine. He referred to the day of the attack as a black day and opted for a peaceful resolution.

The Polish Grandmaster stood with Ukraine by sharing a photo of their flag on his Instagram page.

He followed that up with another photo on Instagram with the hashtag #solidaritywithUkraine. He also urged the chess world to get behind Ukraine and went further ahead to auction his board 1 silver medal at the last European Team Championship.

The FIDE Vice President has strongly condemned Russia’s invasion of Ukraine. He allegedly referred to Russia’s president, Vladimir Putin as a clown and heaped praises on Ukraine’s president, Zelenskyy. He was also particularly glad that FIDE is no longer dependent on Russian sponsorships.

A player who is widely regarded as the greatest chess player of all time has rained tweets on the war between Russia and Ukraine. The former world champion who represented both the Soviet Union, and Russia has always been strongly Anti-Putin, and his lengthy Twitter thread on how the US and NATO can put an end to the war emphasizes his stance.

Several other top players like the Polgar sisters, Ben Finegold, and Fabiano Caruana amongst others, expressed their support for Ukraine. Anna Rudolf, Hikaru Nakamura, and a host of others have been instrumental in fundraising for the victims of the war.

While many heavyweights in the chess world have come out to make a stance in the conflict, several others have avoided the topic, including Anish Giri, Viswanathan Anand, Firouzja Alireza, and several others.

Sons Of The Soil Play The Ultimate Defense

Yuri Timoshenko and Igor Kovalenko founded “The Ukrainian Defense” in real-time as the grandmasters picked up their artillery to defend their country against Russian forces. These announcements were made by his compatriot, two-time Olympic champion, GM Pavel Eljanov.

The first line of action taken by the governing body of chess was to retract the right to host the 44th chess Olympiad from Russia. This action was obviously due to Russia’s hostility towards Ukraine. Emerging chess powerhouse, India, has made a bid to host the tournament.

The Chess Olympiad isn’t the only major tournament to be affected by the war between Russia and Ukraine, as the World Teams Championships got postponed. Since the Ukrainian National team will be unable to play, the Russian National team was also forbidden from playing. The pressure mounted on FIDE as Poland intended to boycott the tournament if Russia was not excluded.

FIDE did not stop there as they also brought the case of Karjakin and Shipov to the Ethics and Disciplinary Commission.

What did Sergey Karjakin and Sergey Shipov do? Keep reading.

Some of your favorite chess sites weighed in on the war, and many top brands stood in favor of Ukraine.

They expressed their support by launching a campaign to support humanitarian teams helping the situation in Ukraine. These teams provide food for a million displaced Ukrainian families.

Daniel Rensch and chess.com supported Internet Chess Club’s campaign, and they held fundraising of their own. The fundraising was supported by their superstar streamer, Hikaru.
They raised about $132,724 from the Tuesday Titled Arena. They released an official statement supporting Ukraine after releasing an article titled, “In Support Of Ukraine.”

The free chess server did not take the backseat in this situation. They lent their voice in solidarity with the Ukrainian people. They’ve also been actively involved in fundraising activities to support those affected in the war.

Perhaps the most active chess portal involved in the discussion of the war between Russia and Ukraine, Chess24 did not hold back in their support of Ukraine.

We are devastated by the Russian invasion of Ukraine.

, they said in an official statement.

They were also in a battle of words with the Minister Of Defense, Sergey Karjakin. The dispute was born from Karjakin’s support of the Russian invasion of Ukraine. They quoted Karjakin’s tweet and openly criticized him for siding with Russia in the war between Russia and Ukraine.

Karjakin replied with questions that chess24 ignored. They eventually blocked the 2022 Candidate, Karjakin who also blacklisted the chess portal saying they don’t exist to him.

Sergey Karjakin has already been established as a staunch supporter of the Russian movement in Ukraine. His compatriots like Sergey Shipov and Anatoly Karpov have also been sanctioned for standing with Russia.

When the Olympiad was moved from Russia, Shipov urged Russian sponsors to withdraw from the event to punish FIDE. This was merely one of his several acts of opposition to Ukraine sympathizers. Former World Champion Anatoly Karpov received a sanction that forbids him from moving through European territory.

The 70-year old has been a part of Putin’s United Russian party. He was also notably absent from the list of Russian players who wrote to Putin and urged him to end the war.

Peter Svidler, Daniil Dubov, Alexander Grischuk, Alexandra Kosteniuk, and several other prominent chess figures, totaling 44, signed a letter to Vladimir Putin, urging him to put an end to the invasion in Ukraine.