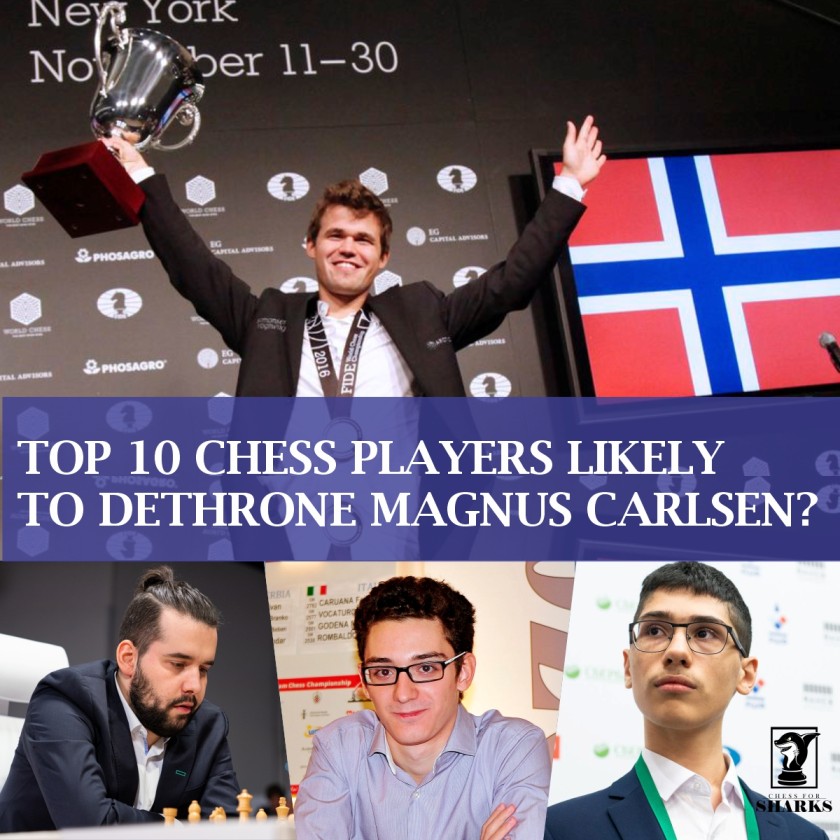 The chess world is currently blessed with a host of players that would’ve probably borne the World Champion title if they had been born in a different era. Players like Fabiano Caruana, Alireza Firouzja, Hikaru Nakamura, and a host of others, all have the potentials of becoming World Champions.

If not for the dominant display of Magnus Carlsen in the last 8 years, we would have seen some of these great names become World Champions. The following are the top 10 players capable of relieving the Norwegian of the World Champion title:

The 25-year old super Grandmaster from Hungary begins our list. He ranks at number 11 in the world as of June 2021. He has been a present figure in elite tournaments like Paris Rapid and Blitz. GM Rapport holds the record for being Hungary’s youngest ever player. He holds the record above chess legends like Pal Benko, Peter Leko, and the Polgar sisters. This player has a decent chance of becoming World Champion if he continues his current rate of improvement.

He is the current Dutch number 1. He is a 4-time Dutch national champion that also won the Magnus Carlsen Invitational in 2021. His peak rating is almost 2800 and he has a close relationship with Magnus Carlsen. When in the mood, GM Giri can become one of the fiercest active players today, but it is rumoured that he has an affinity for drawn games. In a Lichess tournament for titled players, he “berserk”ed the World Champion ( who didn’t get “berserk” back), and he still won the game—to the great surprise of spectators!

The Chinese number 1 is also likely to become the next World Champion. He was a strong favourite to bag the Candidates’ Tournament in 2020/21, but a woeful performance saw him miss out on the chance to be crowned World Champion. Liren Ding, on his best day, is capable of defeating Magnus Carlsen in a match as he did in the Sinquefield cup in 2019. He is still 28 years old and capable of challenging for Magnus’s title.

A player with an eye for Mikhail Tal-like sacs, Russian GM Daniil Dubov is one to watch. Despite not being in the top 20 currently and currently number 7 in Russia, Dubov has shown exceptional vision and understanding of the game. He came up with game-winning sacs against the likes of Magnus Carlsen and Hikaru Nakamura. A notable achievement is winning the World Rapid Chess Championships in 2018. It is an honour that further proves his potential of replacing Magnus Carlsen in the coming years.

It’s no surprise to see another young Russian on this list. 23-year old Vladislav became the European champion in 2019 and he might just go a step further to displace Magnus Carlsen. He is famous for his ability to play speed chess as he’s been the top-ranked blitz player on LiChess (Konevlad). Similarly, he recently won the Katara bullet tournament in June 2021. Improvement in slower time controls could be enough to excuse Magnus Carlsen as World Champion in coming years.

The Azerbaijani super Grandmaster already has a title that appears like the World Champion title when he won the FIDE World Cup in 2019. This is one honour that remains amiss in Magnus’ exquisite trophy cabinet. His critical thinking abilities do not end on the chessboard as he pulled out of the 2020 Candidates’ Tournament amid covid-19 fears. This action was justified as FIDE postponed the tournament halfway through due to the pandemic. GM Radjabov shows good strength by often drawing games with Magnus Carlsen. In 2021, he showed his strength again by winning the Airthings Masters.

We have already seen this name, challenge for the title in 2018. He played so well and didn’t lose a single game, but he lost on tiebreaks. He almost made the candidacy for the World Champion title again in 2021 but just fell short to Russian Ian Nepomniachtchi. Fabi has consistently been world number 2 behind Magnus Carlsen and remains a strong favorite to dethrone the Norwegian. He already has major honours like the US and Italian Championships under his belt and is looking to go for the biggest prize.

The Filipino-born American Grandmaster is one player Magnus Carlsen does not enjoy playing against—especially in finals. Magnus Carlsen was visibly emotional when he beat So in the final of the 2021 FTX Crypto Cup. Magnus lost the Meltwater chess tour to So in 2021, the Skilling Open in 2020, and the Fischer Random chess championships where he got annihilated by So 13.5-2.5. This impressive win proves the American’s astronomical level of creativity that makes him worthy of officially dethroning Magnus Carlsen.

He will become the second Russian to challenge Magnus Carlsen for the title. He is placed at number 2 in this list because of his direct likelihood to dethrone the sitting World Champion. GM Nepo is currently Russia’s number 1 player, and he would fancy his chances of causing an upset in Dubai. He’s currently ranked number 4 in the world and his run of form of late could just be enough to present himself to the world as the new World Champion.

Many might not exactly find it surprising to find the teenage superstar on top of this list. He has shown uncommon maturity to compete with players at the highest level and has already developed a rivalry with Magnus Carlsen. Fans always look forward to an Alireza-Carlsen bullet match-up that leaves them thoroughly entertained. As the top-ranked junior, Alireza has already put up some exceptional displays. He was visibly upset when he lost to Magnus Carlsen at the 2019 World Blitz Championships in a controversial fashion.

The young star shows the courage of a World Champion by abandoning the Iranian federation due to their ban on Israel. This ban forbids Iranians from competing against Israelis, and apparently, GM Firouzja was having none of it.

There goes our list of top 10 players that are likely to dethrone Magnus Carlsen. In case our forecast becomes a reality in the coming months or years, don’t forget to give us credit for giving you a heads up!