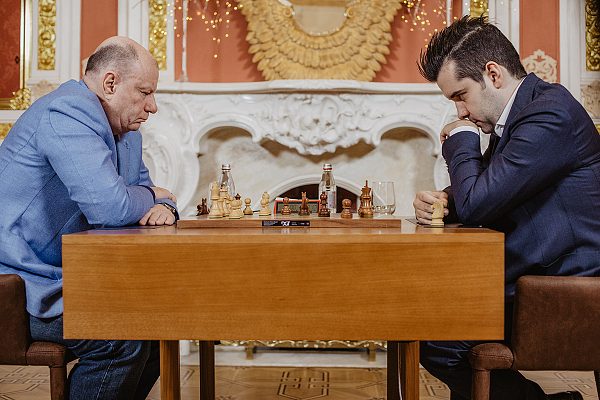 This exciting match which was streamed live recorded a good amount of views from chess enthusiasts in Russia as commentaries were provided by Russian grandmasters Sergey Shipov and Elmira Mirzoeva.

Who exactly is Vladimir Potanin? You may ask.

Vladimir is a Russian business oligarch who heads Interros, a Russian conglomerate with large stakes in mining, metals, energy, finance, retail, real estate and other sectors.

According to Bloomberg Billionaires Index, He is the second wealthiest man in Russia and the 10th richest person in the world with an estimated net worth of $87 billion. The Russian billionaire businessman is also the president of MMC Norilsk Nickel, Russia’s leading metals and mining company, the world largest manufacturer of palladium and refined nickel.

Vladimir has been an active chess enthusiast from a young age playing for his team in inter university tournaments in the 70s. Over time, Norilsk Nickel and Vladimir Potanin have contributed significantly to the development of several sports in Russia, closely cooperating with the Russian Football Union, Russian Ice Hockey Federation, FIDE amongst others. This also includes Russian sportsmen such as Ian Nepomniachtchi during his fight for the world championship.

Back to The Game

Each player got 30 minutes with no increment for the game. Vladimir Potanin had the white pieces while Ian Nepomniachtchi had black.

Vladimir opened with 1.e4 and after the first few moves, Nepo went for the Marshall attack. Both sides had some very rare continuation but black was able to get on the offensive in no time after a very nice knight sac combination.

Vladimir played well and put up his best defensive act but against a super grandmaster, one needs more than that. Nepo’s connected scary passed pawns on the queen side eventually decided the game. Vladimir resigned on the 38th move.

Check out the full game below:

When asked about the game in the press briefing, Both sides gave very interesting perspectives.

Here’s what Vladimir Potanin had to say –

“Unlike Yan, I could not afford not to prepare,” said the russian businessman about the game with the grandmaster. – So I tried to figure out how to play. And I tried to choose such a fairly reliable opening, the Spanish game, in which White can afford not to give up for a long time. “

“Going into the match, I felt as excited as when going into hockey battles. I had all reasons to anticipate a serious test in store for me. After all, I had an opportunity to face one of the world’s best grandmasters, and this experience is precious.”

Here’s from Ian Nepomniachtchi on the other hand –

“Honestly speaking, this being a friendly game, I came unprepared for it. However, the opponent’s level of play took me by surprise. Vladimir Olegovich was obviously serious about the game and delivered a worthy performance. No kidding: I did not give in, no way. It’s nice to see the match being in the limelight of the mass media. I think it will do an outstanding service to chess.”

When asked about organising a chess league, Vladimir Potanin turned down the idea.

“As you may well know, our company and I personally promote chess and support our Chess Federation, and FIDE. In my opinion, it is vital to develop children’s chess,” said President of Norilsk Nickel. – As far as I understand, interest in chess has increased, and now we have many decent players. If previously our chess school used to be out of anybody’s league, now the competition has become very tough. Therefore, attention should be paid to training new athletes.”

“As for Nepomniachtchi, our relationship is not about the World Championship match only, and we continue to support him. Now we have finally met in person. We will root for him and wish him success. Of course, if Ian wants to continue this kind of cooperation, I will support him in every possible way,” added Potanin.

The press scrum was followed by the President of the Chess Federation of Russia, Andrey Filatov, and the Candidate of Historical Sciences, Dmitry Oleinikov, introducing Vladimir Potanin to the unique exhibits of the CFR Chess Museum.