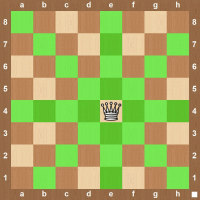 Before you ask, “where does the queen go in chess?”, let’s tell you a bit about chess. The chess game is a tactical battle played between two opposing players, each having different color chess pieces. The chess pieces or chessmen for both sides include the King, Queen, Bishop, Rook, Knight and Pawn.

Each piece has its value. The pawn is the lowest in value with 1 point and the Queen the highest with 9 points.  So how does this powerful piece move? Where does the queen go in chess?

READ ALSO: How To Capture The Queen In Chess: The Ultimate Chess Hack

The queen is the most powerful piece on the chessboard. She can move any number of squares vertically, horizontally or diagonally, thereby combining the power of two pieces which are the rook and bishop. In a chess game, each player starts the game with one queen, placed in the middle of the board next to the king. Since the Queen is the strongest piece on the chessboard, many players often aim to promote their pawns to a queen.

Having an in-depth knowledge of the abilities and qualities of a queen, such as the value of the queen, where the queen goes in chess, and how to use the queen to create powerful attacks on the chessboard, is vital to winning a chess game.

Where Does The Queen Go In Chess?

The queen can go to any of the 64 squares of a chessboard in a straight line vertically, horizontally, or diagonally, as long as those squares are unoccupied by its pieces. By doing this, the queen combines the moves of the rook and bishop.

The queen captures by occupying the square on which an enemy piece is standing.

In a chess game, the queen can also be brought back to life when captured or even get a double queen if the player still has their queen on the board. This technique is called Promotion.

Where Does The Queen Go In Chess When Promotion Happens?

Although in a standard chess game, both sides start with one queen each, a player can promote his pawn into any of several types of pieces, including a queen, when the pawn is moved to the last rank of the opposing side (the 8th rank for white and the 1st rank for black).

A queen created by promotion can be an additional queen or if the player’s queen has been captured, a replacement queen. Pawn promotion to a queen is popularly called “queening” among chess players.

The Queen is the most common type of piece players promote their pawns due to its unrivalled powers and value.

Although the queen is the strongest piece on the chessboard, It can sometimes be sacrificed to gain an even greater advantage.

However, queen sacrifices are very risky. When a player sacrifices his queen, they aim for either an overwhelming advantage that eventually leads to checkmate or outrightly checkmating the opponent. Failure to get an overwhelming advantage or checkmate spells doom for the player that performs the sacrifice. Because of this, queen sacrifices are not always seen on the board, but when they are played and executed perfectly, they create masterpieces.

An example of a game involving a successful queen sacrifice is the beautiful game dubbed, The Immortal Game, which was played between Adolf Anderssen and Lionel Kieseritzky.

READ ALSO: What Is Material Advantage In Chess?