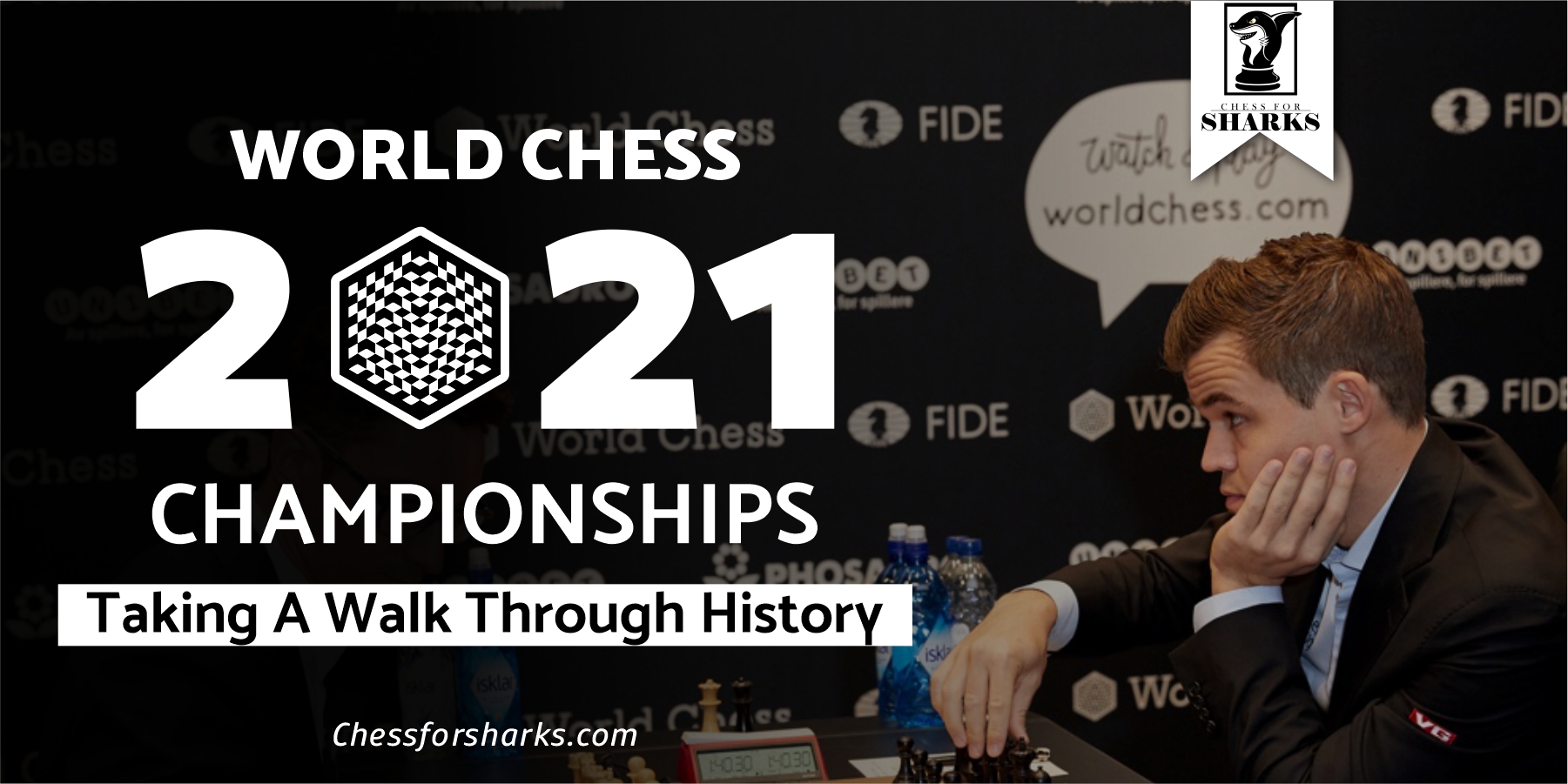 Chess is similar to many things. In this instance, we’ll be looking at the similarity between chess and—you might not expect this but—BOXING! In boxing, a challenger must rise through the ranks, face off with the sitting champion and defeat him to snatch the title. There are no right hooks or uppercuts or KOs in chess, but there is intense mental warfare using a variety of strategies and tactics. In like manner to a boxing title match, the World Chess Championship is between two players. One is the titleholder and the other is the challenger who usually goes through a series of tests to claim the right to challenge.

Chess fans around the globe have a spectacle to behold this year. In the blue corner, we have current number 1 in the Russian Federation(as of the time of writing), first time in this unique tournament, and lover of the Scotch Game—Ian Nepomniachtchi! On the red corner, we have the lover of football(soccer) and Real Madrid, Champion of Norway, World number 1 and Champion of the world—Magnus Carlsen! Before we talk more about who our players in the spotlight are, let’s say a thing or two about what the World Chess Championship is.

The World Chess Championship is a two-man tournament that occurs biennially(once in two years). The special tournament determines the chess player who will claim the right to be called the World Champion. It is open to all ages and genders. However, other classes of World Chess Championships which include separate championships for women, youth categories, seniors, and even computers, have been developed over time. This apex tournament makes use of the classical time control. Similarly, there are also separate championships according to time controls like blitz and rapid. Chess960 and Problem-solving are the least popular world championships in chess.

Today, Wilhelm Steinitz is regarded as the first official World Champion. He was dethroned by the German Emanuel Lasker who holds the record of being the longest-serving world champion. FIDE was founded in 1924 but didn’t determine the World Chess Championship tournament until 1948. So far, 16 undisputed champions have emerged. It is required to mention that a rift between FIDE and a group of elite players led by the sitting World Champion, Garry Kasparov, ensued in 1993. From 1993 to 2006, there were two different sets of World Champions—The Classical World Champions and the FIDE World Champions. In 2006, all disputes were settled, and Vladimir Kramnik continued as an undisputed World Champion.

Interestingly, the World Chess Championship is not all about a qualification process. Since as early as the late 1950s, the defeated World Champion has had the right to claim a rematch. Mikhail Botvinnik lost his crown to Vasily Smyslov, both of the Soviet Union, in 1957 but was able to reclaim his crown the following year. The same occurred between Mikhail Botvinnik once more and the magician from Riga, Mikhail Tal between 1960 and 1961. The last time a rematch between an incumbent World Champion and an overthrown World Champion took place in 2008 after Viswanathan Anand defeated Vladimir Kramnik in 2007. In conclusion, Viswanathan Anand won the rematch to remain World Champion.

Before the World Chess Championship

The players in this category did not bear the title by official standards but by reputation.

Ruy Lopez was a Spanish priest and arguably one of the best chess players of the 16th century. He was an unofficial World Champion for about 20 years. Blindfold chess was one admirable skill Lopez used to win the hearts of the chess lovers of his time. His most notable contribution to the empire called CHESS is his Ruy Lopez opening.

The Ruy Lopez opening is also called the Spanish Opening.

Giovanni Leonardo was a lawyer that originated from the kingdom of Naples—now known as Italy. He was also a fine player of the 16th century and competed with the likes of Ruy Lopez and Paolo Boi. Calling his town, Cutro, the “City of Chess” is one of his legacies to the chess world.

He is another Italian player that chose chess over religion. Joining Ruy Lopez to wow spectators through blindfolded simultaneous exhibitions earned him favors from notable figures like Catherine de Medici. Paolo Boi might not have made a contribution that lasted through time, but he deserves credit for playing a pioneering role in chess during his era.

Chess Academies today ought to pay some tribute to this legend, as he birthed a trend of chess academies to fertilize the chess-playing culture of his region. The Salvio Gambit of The King’s Gambit is where he left his mark in chess theory to this day. Salvio also embedded some details in the understanding of the Lucena position, which comes to play in the end game.

Like several other undisputed World Champions, Greco sought and defeated strong players across major European regions. He was a master in the art of finding beautiful combinations. This talent led him to discover a mating pattern called Greco Mate. This mating pattern makes use of the Rook and Bishop.

The mating pattern was not his only contribution to chess, as the Greco defense is named after him. He proposed other opening variations. In summary, Gioachino Greco is the first professional chess player.

He was a player that answered “teacher” from chess great, Francois-Andre Philidor. The French player was the best player between 1730 and 1755. He was also brilliant in finding combinations, as the Legal Mate was another way he stamped his name firmly in the history books. In this mating pattern, the Queen is sacrificed in an opening trap(Legall’s Trap) to draw the king into an admirable net of checkmate.

It didn’t take long for Philidor to follow in the footsteps of his mentor, Legall de Kermeur, to become the best chess player in the world. He dedicated his life to chess and developed many popular chess theories that are still in use today. His Opening for Black—The Philidor Defense’s most popular usage was arguably in the Opera Game between Paul Morphy and Duke of Brunswick and Count Isouard. Other contributions include the Philidor position in the end game, and like his mentor, a mating pattern called Philidor mate.

This mate—also called the Smothered Mate—is described by many chess players as the most beautiful type of mating pattern. In conclusion, he’s one of the most known chess historians.

The French extended their dominance through Descapelles from 1815 to 1821. His time in military service didn’t prevent him from having a strong affinity for chess. Even after losing his right hand to war, Alexandre Deschapalles kept his habit of giving odds to skilled players and defeating them. He is one of the earliest chess hustlers because he loved to make stakes on his games.

Here is another French chess legend who took after his mentor Alexandre Deschapalles. He turned to chess as a last resort after squandering his wealth in poor investments. Louis-Charles’s contribution to chess theory is not clear as of the time of writing.

Most of the chess pieces used today are Staunton sets. We have English Howard Staunton, who was the key promoter of this design, to thank for that.

Staunton ended the French dominance in the chess world after defeating Saint-Amant. He also has an opening named after him called, the English Opening, one of the most popular openings today.

The Morphy mate—a checkmate pattern, The Morphy Defense—a variation of the Ruy Lopez, are some of his legacies.

Just before the debut of the World Chess Championship, English chess master Johannes Zukertort was jointly declared World Champion along with Wilhelm Steinitz. He discovered and named one of the most popular flank openings called the Zukertort Opening(1.Nf3).

Back to our highly anticipated event. We already introduced the players in the red and blue corners. Now we briefly take a look at the players.

This is the 31-year old’s first time in the event. He aims to bring back the chess champion crown to Russia. Russia is arguably the most chess-crazed nation on the planet and many fans would be backing Ian to overpower the clever Norwegian in 14 games. His peak standard Elo rating is 2792, just a few points shy of the 2800 mark. However, Ian is no slug on the chessboard as he boasts a peak rating of 2880 in blitz.

Unlike Caruana, Magnus could experience an upset if this match heads into tiebreaks again. Nepo has won many major tournaments including the Russian Championship, the World Youth Championship(U12) where he edged out Magnus Carlsen on tiebreaks, and the 2020 FIDE Grand Prix with which he qualified for the Candidates’ Tournament. Ian will not be able to represent his Russian flag and will play with a neutral FIDE flag because of the Court of Arbitration of Sports ban on Russian athletes in world championships because of a doping scandal.

What is left to say about the 30-year old World Champion? He has certainly earned his place in the Greatest Of All Time debate? His versatility in all areas of the game put him over the rest. Since becoming the 16th undisputed World Champion in 2013, he has successfully defended his title three times. Once against the defeated World Champion, Viswanathan Anand, in a rematch, another against Sergei Karjakin to put a dent to the Russian’s fairytale ascension in the chess world, and lastly, against US top seed, Fabiano Caruana. Unsurprisingly, he has won almost every tournament he has ever participated in and heads into the 2021 World Chess Championship as a clear favorite.

The prestigious match will take place at the Dubai Exhibition Centre during the Expo 2020 event. The match is meant to run for a space of 23 days, between the 24 November to the 16 December. There is a prize pot of $2 million in which the winner takes 60% and the opponent gets the rest.

Will Ian Nepomniachtchi’s name be added to this legendary list to become the 17th World Champion?