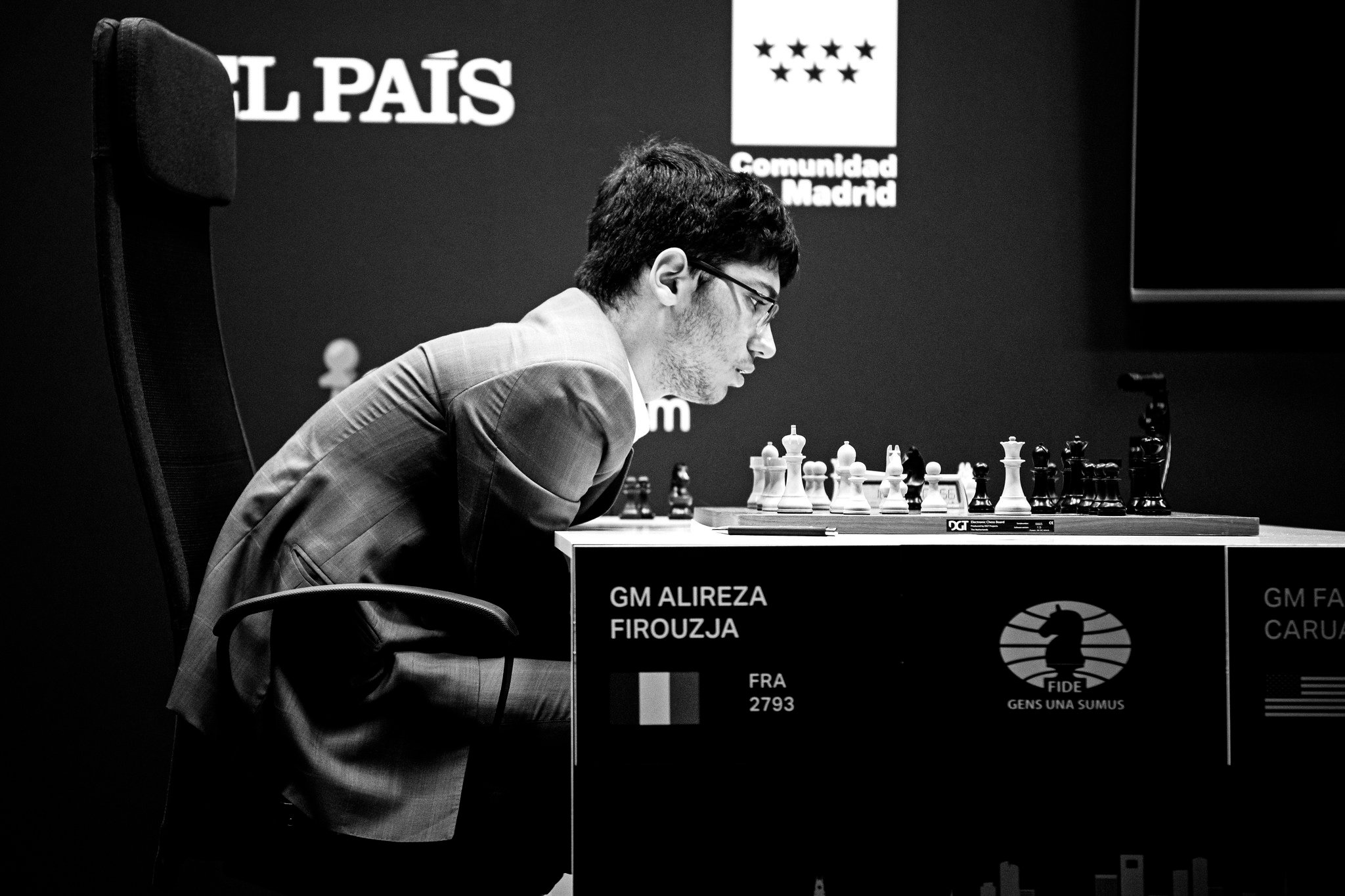 It seems Magnus Carlsen might not be getting his wish as his preferred challenger languishes at the sole bottom of the standings. Round 6 of the FIDE Candidates Tournament 2022 was arguably the most interesting round. Although there were two decisive results, what is a Candidates round without a draw or two? Let’s take a closer look at the games.

Round 6 Of The FIDE Candidates Tournament 2022: The Only Unbeaten Underdogs Left

The Azerbaijani and Hungarian grandmasters maintained their unbeaten run in the Candidates as they settled for a draw after an interestingly contested game. Rapport went for the Sicilian Defense, and the Game opened rather naturally.

After the Knight exchange, Radjabov went for a rather uncommon line in 7.Qd3. Rapport double pushed his d-pawn in response to the strange idea, and white played Qg3. The idea here is to prevent the a-rook from developing to the b-file and prevent the dark-squared bishop from developing.

Returning the c3-Knight to b1 in response to 9…d4 made Radjabov’s position look undeveloped, but Stockfish had no problems with it. The game continued to marvel as both sides ruined each other’s chances of castling. The game continued openly, and it didn’t come as a surprise when the queens came off the board through 21…Qxe1 22.Kxe1.

Black’s rook on the second rank looked to pose some problems in the position, but it was dealt with at the expense of two pawns. Although two pawns down, Stockfish wasn’t exactly displeased with white’s position. Radjabov was two pawns down, but Rapport had four pawn islands, so picking them off would be relatively easy.

Rapport made the first blunder of the Game with 37…Rxh4, but Radjabov squandered a +3.2 advantage by exchanging his bishop to form a rook battery on the seventh rank. At the sight of a battery, Radjabov, three pawns up, had to settle for a draw.

Round 6 of the FIDE Candidates Tournament 2022: Teimour Radjabov ½ – ½ Richard Rapport

READ ALSO: Magnus Carlsen Urges Ian Nepomniachtchi To “Be A Shark” After Round 5 Of The FIDE Candidates Tournament 2022

A DeJa Vu Loss For Alireza

It looked like a rematch of their last Game in the FIDE Grand Swiss 2021, in which they both qualified as winner and runners-up of the event. The Nimzo-Indian was the response to Alireza’s 1.d4. The first 14 moves were peaceful. Then, they traded off the d and c-pawns, and the position broke open.

Alireza’s struggles started when he gave room for a discovered attack in 15…e5, attacking an adventurous Queen. He responded with 16.Qh5 before opting to relax the position with a bishop offer on move 17. Caruana accepted the trade, but that didn’t make life easier for the 19-year-old.

While the position was still rather balanced, Alireza became too adventurous with an inaccurate rook-for-Knight exchange with 20.Rxd7?!. Stockfish’s evaluation in the Game after that ambitious capture never dropped below -1.5 in favor of Fabiano.

Alireza went from bad to worse as he was extremely low on time like he was in his last encounter against Caruana in the Grand Swiss and the Round 4 against Ian Nepomniachtchi. Caruana traded as many pieces as possible while reducing Alireza’s chances of fighting for a draw.

Caruana slowly advanced towards an easy win against Alireza with every move. However, the match showed that the top junior has some work to do in terms of time and risk management.

Round 6 of the FIDE Candidates Tournament 2022: Alireza Firouzja 0 – 1 Fabiano Caruana

A Chess Game Played Perfectly Is A Draw

Nakamura tweeted, “a chess game played perfectly is a draw,” as both players played an almost spotless game that lasted 42 moves. Nakamura preferred the Italian Game this time around, but as usual, the opening was rather smooth book moves. The first exchange came with Bxc6, a bishop-for-Knight trade that left black with some early doubled pawns.

At no point in this Game did any side have a clear winning advantage, as the middle Game proceeded with more minor piece exchanges. Moreover, both sides had different plans, as Nakamura was eyeing an attack on the kingside while Ding focused on advancing a passed pawn.

Neither Nakamura nor Stockfish felt particularly bothered by the advancing pawn as Nakamura seemed to set the stage for either a winning attack or a forced draw on the kingside. 30.Rg3 saw Nakamura tease the King’s closed file, and 32.Qh5 saw the attack build-up with a defining control of the c1-h6 diagonal that could cause all sorts of problems for white.

We eventually saw Nakamura launch the full-scale attack on the kingside with 33.Bxh6. Ding declined the sacrifice, and Nakamura went on to play 34.Bxg7. Now, Ding responded by recapturing the bishop with a Knight. A follow-up rook-for-Knight trade meant that Nakamura no longer had the means to prevent the d pawn from promoting.

Hence, the only plan was to force a draw by perpetual checks.

35 moves were all it took for Ian Nepomniachtchi to quench Jan-Krzysztof Duda’s unbeaten streak in round 6 of the FIDE Candidates Tournament 2022. One could assume that Nepo took Magnus Carlsen’s staunch advice to “be a shark!” as he capitalized on slight inaccuracies from Duda to clinch his third event win.

Nepo opted for an unusual Zukertort opening and hastily fianchettoed his King’s bishop before casting on move 4. Even though Duda made no significant error in the middle game build-up, Nepo’s position was looking slightly better after 13…Qe7. Stockfish didn’t particularly like Duda’s choice to castle afterward, and a kingside pawn March began by a fearless Nepo.

15.g4 repelled a bishop who showed up in the opening to threaten an exchange, while 16.f4 prompted a prophylactic 16…h6 to prevent the dark-squared bishop from falling into a Noah’s Ark Trap. Duda’s first inaccuracy came with 20…hxg5?! 21.hxg5 meant Nepo now had a chain of three advanced connected pawns on the kingside.

Stockfish then gave a decisive +4.0 in Nepo’s favor after a greedy 23…Qxb2 from Duda, who seemed to be playing for a win. By the time Duda realized what was going on, 29.Rxf5 meant that his kingside was now too exposed with just one pawn left.

That danger didn’t stop Duda from grabbing more pawns with 30.Rxa2. Having a piece up and harmonized rooks made Stockfish declare a forced checkmate-in-14 at move 33, Duda wasn’t patient enough for Nepo to actualize the Stockfish prophecy. He resigned after 35.Rg3.

READ ALSO: What Is A Blunder In Chess? Know These Facts!